Join court of the legendary English King Arthur in the Crown of Avalon slot. This trip to the mysterious island has been created by Iron Dog Studio and is played on a 5 reel, 10 payline machine.  The gameplay here is relatively simple. If a wild Excalibur symbol lands on the top position of any reel on a base game spin, it expands to fill that reel. Landing 3, 4 or 5 crown scatters triggers the game’s Free Spins feature. You’ll play free spins with a special expanding symbol. See what else Merlin, Guinevere and Arthur have in store in our detailed Crown of Avalon review.

Where to Play Crown of Avalon Slot

The Crown of Avalon slot is played on a traditional 5 reel, 3 row, 10 payline machine. Winners are created by landing 3 or more matching symbols (just 2 for the higher value symbols) in a payline, starting from reel 1.

You can start your quest from between 10p and £50 per spin. Click on the coins tab to adjust. Click on the A button below the reels for autoplay. You can run between 5 and 999 autospins. There are plenty of options to set win and loss stop limits too. You can also stop autoplay when you land the feature.

The Crown of Avalon RTP is 96% which puts it slap bang in the middle as far as player return rates go. Variance wise, it’s high. The bigger wins will come in the Free Spins feature. The max win is 2,000 x stake per spin or free spin. 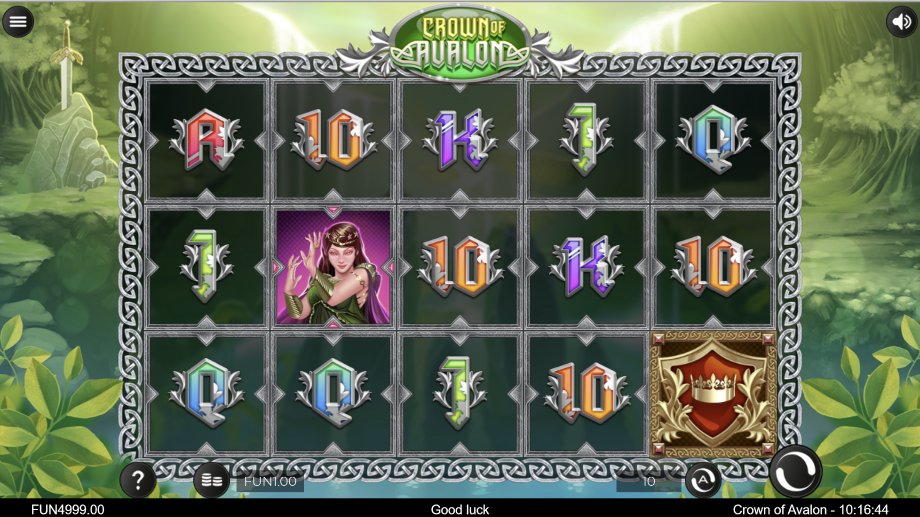 The design in the Crown of Avalon slot is nicely done. For those not up to speed with their Arthurian history, Avalon was a magical island where King Arthur’s sword Excalibur was forged. Arthur was later taken to the island to recover after being severely wounded at the Battle of Camlann.

Set against a green-tinged, rustic backdrop, complete with the famous sword in the stone, the soundtrack has a traditional, magical feel but also feels quite modern. The symbols are nicely drawn and have a fresh look about them. Put all that together the design comes together well to create a good ambience.

The reels include heraldic A to 10 symbols alongside more rewarding symbols that relate to the Arthurian theme. There’s a sorceress, Merlin the magician and Queen Guinevere. The best of the standard symbols is of course, King Arthur. He will get you an award of 1, 5, 20 or 200 x your stake if you land 2, 3, 4 or 5 on a payline.

King Arthur’s legendary sword is the wild. This substitutes for all the standard symbols when it makes up part of a winning combination.

You can play this Arthurian adventure on all devices including PC, tablet and mobile. The sleek, colourful visuals work very nicely on the Crown of Avalon mobile slot. So too does the simple gameplay. It’s a solid mobile slot.

Bonus Features in Crown of Avalon

Iron Dog Studio has kept things nice and simple as far as features are concerned in Crown of Avalon. This isn’t a slot that’s overflowing with extras. There are 2 extras that can be well worth landing though and expanding symbols are central to both of them.

As mentioned, the wild symbol is represented by King Arthur’s legendary sword. Hope to see the sword land in the top position of a reel as this triggers the Expanding Wilds feature. The sword will fill the whole of that reel, turning it wild in the process.

It’s possible to land Excalibur wilds on the top position of multiple reels on the same spin which means multiple stacked wilds. Landing the wild on all 5 reels will lead to a 2,000 x stake payout. 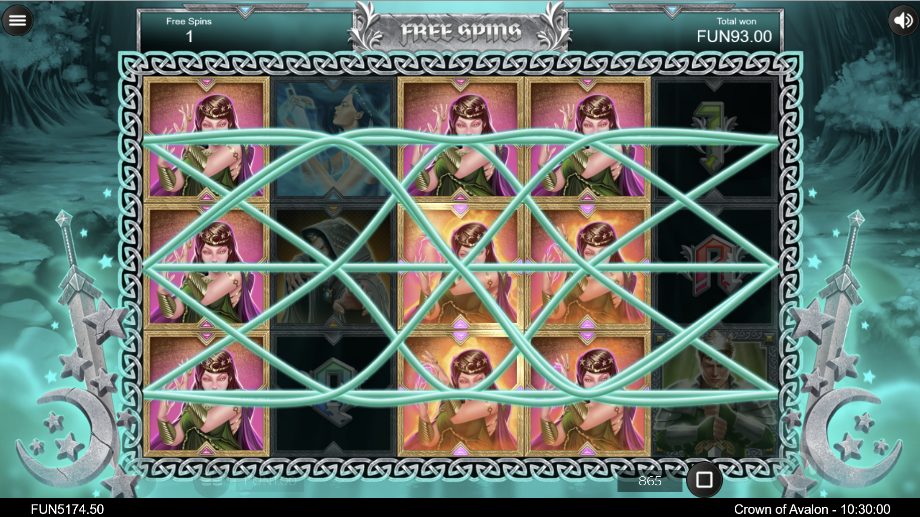 Expanding symbols are the key to success in the game’s Free Spins feature too. It’s triggered by landing 3, 4 or 5 of the shield and crown scatter symbol anywhere on the reels on the same spin.

The scatter symbol also acts as a wild and replaces all the standard symbols if you land fewer than 3 of them. Once triggered, you’ll receive a payout of 2, 20 or 200 x your total stake followed by 10 free spins.

Before the free spins begin, 1 standard symbol is picked at random to be the special symbol. This gold-edged symbol will expand and fill the whole of the reel whenever it appears during the free spins. It’s possible to land multiple expanding symbols on the same free spin.

Retriggers are possible here too. Landing 3, 4 or 5 scatters delivers an extra payout as well as adding another round of 10 free spins to your total. You can retrigger multiple times for unlimited free spins.

Crown of Avalon Review Summary – nothing innovative but playable enough

There’s nothing complicated about the Crown of Avalon slot. You’ll have seen expanding wilds and free spins with a special expanding symbols in plenty of other slots. For example, the Book of Dead slot by Play ‘n GO. They’re a perfectly solid combination, just a little on the vanilla side.

Like classic ‘Book of’ slots, the Free Spins feature is where the bigger wins will come from. The higher value the special expanding symbol is, the bigger the potential payouts. If Arthur is your chosen symbol, landing him on all 5 reels will lead to a 2,000 x stake payout. Unlike the ‘Book of’ slots, the max win is below the 5,000 x stake average.

Design wise, Crown of Avalon is nicely done. The visuals are easy on the eye and the soundtrack has just the right magical quality about it. It’s not the most exciting slot we’ve come across but if you enjoy the Arthurian theme, Crown of Avalon should appeal.

What is the Crown of Avalon RTP?

The Crown of Avalon return to player rate is 96% which is about average. For every £100 wagered, £96 is paid back to the player on average. It’s a high variance slot so don’t expect big wins often.

What is the Crown of Avalon max win?

The top payout from the Crown of Avalon slot is 2,000 x your total stake per spin. This is done by filling the reels with the high value Arthur symbol or wilds. This is more like via the 2 bonus features.

Is there a Crown of Avalon free spins round?

Yes, land 3, 4 or 5 of the crown and shield scatter symbol and you’ll get a payout of 2, 20 or 200 x your stake as well as triggering the Free Spins feature with 10 free spins. These come with a special expanding symbol that fills the reel whenever it appears. There are also unlimited retriggers available.

Are there any other Crown of Avalon bonus features?

Hope to see Arthur’s famous sword Excalibur land on the top position of a reel. When it does, the Excalibur wild expands and turns the whole of that reel. Furthermore, the Expanding Wilds feature can give you up to 5 wild reels.