Pixies of the Forest Slot Review

Based on a massively popular land-based casino game, the Pixies of the Forest slot comes from IGT and transports players to a magical woodland. The set up here is a little unusual. The action plays out on a 5 reel, 99 payline, tumbling reels game engine. The feature highlight is the Free Spins Bonus feature. Once triggered, pick a bonus symbol to see how many free spins you’ll receive. This will be a minimum of 5 but can get as high as 11. This woodland has spawned a jackpot version and a sequel. Does the original still offer some magic? Find out in our full Pixies of the Forest review.

Pixies of the Forest : Demo

Where to Play Pixies of the Forest Slot

The Pixies of the Forest slot game is played on a 5 reel, 3 row machine with 99 paylines oddly enough. It uses a Connected Lines mechanic as you benefit from 3 in 1 betting with all 99 paylines in play for just 33 coins.

Winning combinations are formed by landing 3 or more matching symbols or wilds across a payline from left to right, starting from the leftmost reel. A tumbling reels mechanic is active here so it’s possible to land multiple wins from the same set of spins.

You can play Pixies of the Forest at stake levels that range from 33p to £990 per spin. Use the + and – keys next to the Coin Value box below the reels to adjust your bet size. At most UK slot sites, the max bet will be capped at £99 usually.

The Pixies of the Forest RTP is 94.9% which is slightly below average but fairly typical of a land-based slot from the IGT catalogue. The RTP could be as low as 93% at some casinos so best check before playing for real money.

The volatility here is medium with the game offering a balanced range of payouts. The max win is 2,000 x your total stake per spin. 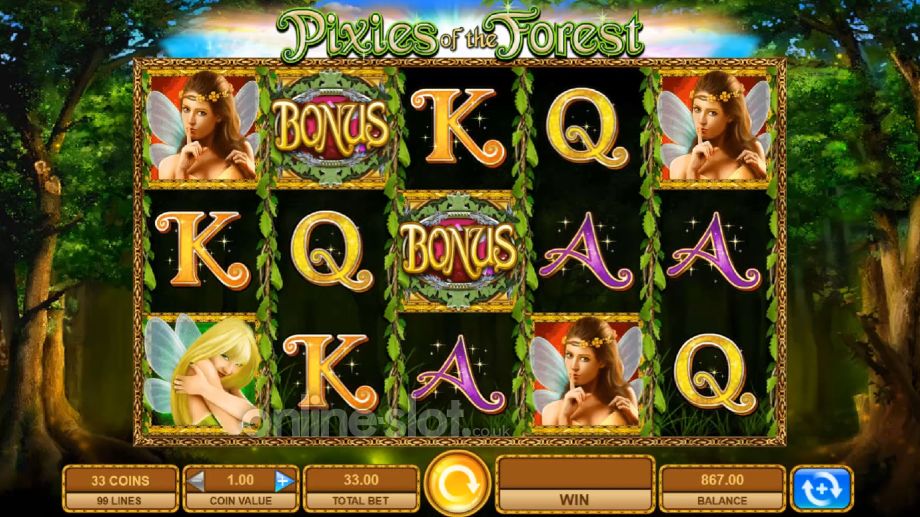 An enchanted woodland is the setting for the Pixies of the Forest slot. With a pixie/fairy theme, the pixies will remind you a little of Peter Pan’s Tinker Bell. This game was originally released in Las Vegas casinos so it’s a little outdated graphically. IGT have since revised it using HTML5 technology.

There’s a slightly soft focus feel to the design here which is no surprise given the Pixie theme. If you’re going to play a slot called Pixies of the Forest, it was always going to look something like this.

On the reels, you’ll find A, K and Q symbols alongside a trio of Pixies. One of the trio is done cartoon style, the other 2 have more natural looking qualities. In fact, the most rewarding symbol is a dead ringer for a Pixie Halle Berry. Land 5 of her on a payline and you’ll scoop a payday of some 30.30 x your total stake.

More rewarding still is the Pixies of the Forest logo symbol which pays 0.6, 12.12 or 60.6 x your total stake if you manage to land 3, 4 or 5 across a payline. There’s also a wild that can land on reels 2, 3 and 4 in the base game. It can also hit on reel 1 in the bonus feature which will be looked at in detail below.

IGT has created fully optimised Pixies of the Forest mobile and tablet slots. All versions come with the same enchanting design, tumbling reels mechanic and straightforward features. You can’t go wrong with that simple formula if you’re using a small screen smartphone device to play.

Pixies of the Forest Bonus Features

Many slots that started life in the casinos of Las Vegas are usually very simple. There’s a bit more going on in Pixies of the Forest than you might imagine, starting with the slightly unorthodox game engine. The other feature highlight is a classic free spins bonus. We’ll start by looking at the mechanic. 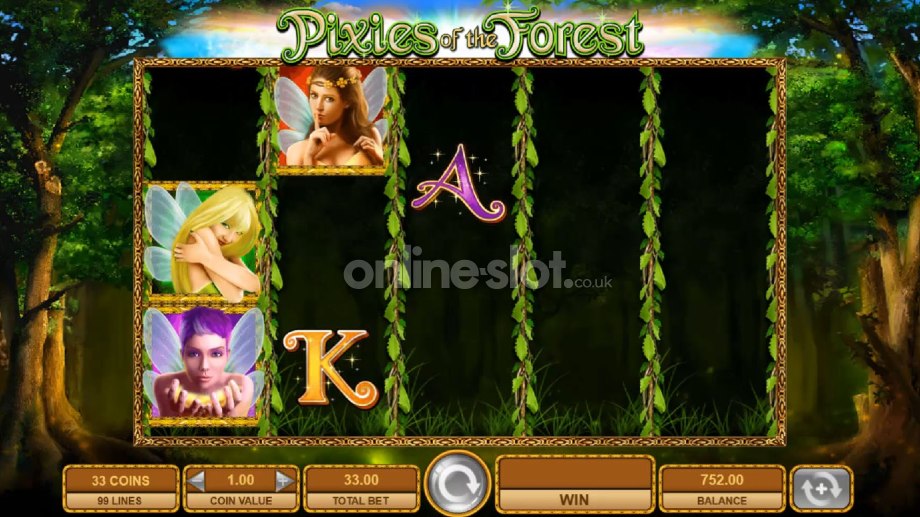 Pixies of the Forest uses a Tumbling Reels feature. After a successful spin, the winning symbols are removed from the reels and new symbols drop in and replace them. A new payout consideration is then made with the newly dropped symbols in place. 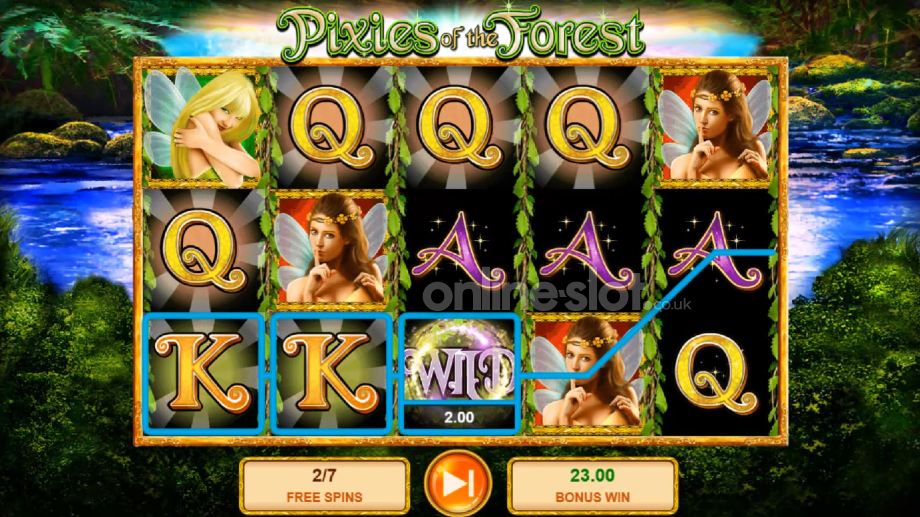 Land the bonus symbol on the first 3 rows of a payline and you’ll activate the game’s Free Spins Bonus feature. Click on 1 of the triggering bonus symbols which will reveal how many free spins you’ve been awarded. This could be as low as 5 but you could land 11 free spins if fortune is with you.

Since its online release in 2014, the Pixies of the Forest slot has become a big hit with online players. There’s nothing very complicated on offer here but the large number of paylines, tumbling reels and free spins has proved a very popular combination. So much so that it has spawned a sequel and a spin off jackpot version.

The theme and the design might be a little too cutesy for some tastes but if you like classic brick and mortar style casino slots that comes with a hint of fantasy, Pixies of the Forest should appeal. You can win the max 2,000 x stake payout on a base game or free spin which is good.

Check out Da Vinci Diamonds which comes with the same bonus features but offers up to 300 free spins and max wins of 5,000 x stake per spin. If you like IGT and want something more modern with big win potential, the Skeleton Key slot comes with up to 7,776 ways to win, an unlimited multiplier in the free spins and a mind-blowing 83,333 x stake max win per spin.

Pixies of the Forest FAQs

What is the Pixies of the Forest RTP?

The Pixies of the Forest RTP is 94.9%. Lower than the 96% online slots average, it’s originally a land-based casino slot so the return to player rate is pretty standard.

What is Pixies of the Forest max win?

The most you can win per spin is 2,000 x your total stake. This is achieved by filling the reels with the high value Pixies of the Forest logo symbol.

Are there any Pixies of the Forest free spins?

Yes, the Free Spins Bonus feature sees you pick from the triggering bonus symbols to win up to 11 free spins. More importantly, wilds now appear on reel 1 which increasing your winning potential.

Can I try the Pixies of the Forest demo?

Yes, the Pixies of the Forest free play version is available here at Online-Slot.co.uk. You can enter this enchanted woodland on all devices too.

Is there a Pixies of the Forest mobile slot?

Yes, IGT has revamped the game using HTML5 technology. This means you can play Pixies of the Forest on mobile, tablet and desktop devices, including iOS, Android and Windows.