Is the fickle finger of fate pointing in your direction? Try and change your luck in the Hexbreak3r slot (or Hexbreaker 3) a fortune-themed game from IGT.  Played using the 5 reel, Multiway Xtra game mechanic, collect horseshoes which can expand the number of rows in play and increase number of ways to win from 243 up to a maximum of 59,049. Enter the Luck Zone to win cash prizes or trigger the Free Spins Bonus feature which opens up even more winning opportunities. Find out more about this rather complicated slot in our detailed Hexbreak3r review.

Where to Play Hexbreak3r Slot

The action in the Hexbreak3r slot begins on a 5 reel, 3 row, 243 ways to win machine. To get a win, you need matching symbols from left to right starting from reel 1, in any position.

You can try your luck here at stake levels that start at 80p per spin, rising to a maximum of £240 per spin. That’s a high minimum stake level so might not be suitable for microstakes players. Autoplay is available if required. You can run up to 50 autospins and set win and loss stop limits as needed. Autoplay ends automatically if you trigger the free spins or land a jackpot prize.

The Hexbreak3r RTP is 96.5% which is higher than the slot average. The volatility is in the medium range with a balance between frequency and size of payouts. It’s possible to win 6,144 x your stake from a single spin. 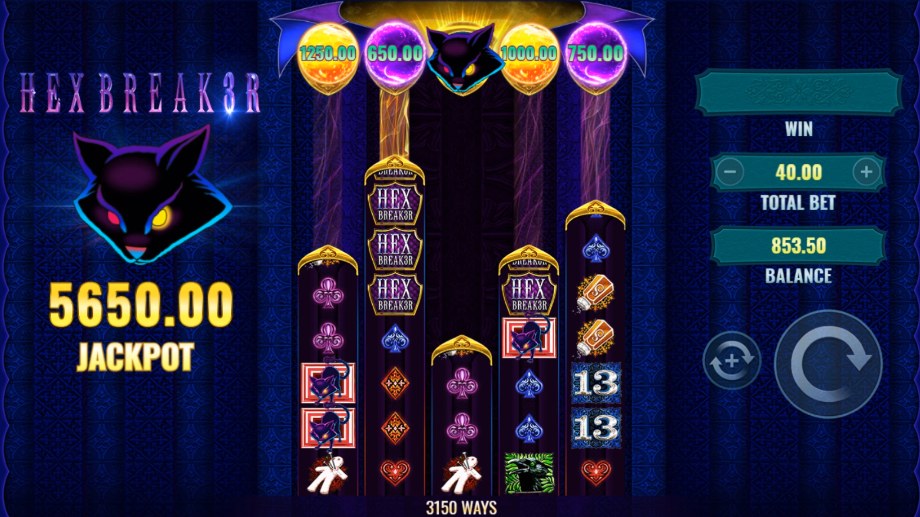 The Hexbreak3r slot has a fortune theme. Well, it actually focuses on bad luck as the ‘bad luck’ symbols challenge you to ‘Break the Hex’ and change their fortunes. There’s a Halloween feel to the catchy soundtrack too.

It’s not exactly a horror-themed slot but it’s something that should prove popular towards the end of October. There’s a cartoonish quality to the imagery but there’s still something slightly creepy about the whole thing.

The reels in Hexbreak3r feature playing card suit symbols alongside a variety of symbols associated with bad luck. They include a voodoo doll, spilt salt, the number 13, a raven and a black cat. The black cat is the highest paying symbol. The Hexbreak3r logo is the wild symbol and substitutes for all symbols bar the bonus scatter.

You can play Hexbreak3r on all devices including computer, tablet and mobile. The colourful visuals against the dark backdrop are nice and sharp, even on a smaller screen device. Playing in portrait mode on your mobile offers the best experience with the expanding reels. It’s playable enough on mobile.

This celebration of all things (bad) luck is quite unusual as far as gameplay is concerned. There’s the unorthodox game engine for starters. The bonus features in the Hexbreak3r slot are a little different too. Expanding reels can deliver cash bonuses. There’s a free spin feature too. We’ll start with the expanding reels mechanic.

Look out for the horseshoe symbol landing on the reels. When it does, the Expanding Reels feature comes into play. That reel then expanded by 1 row.

This also increases the number of ways to create a winning combination. At the maximum height, you will play with 59,049 ways to win. 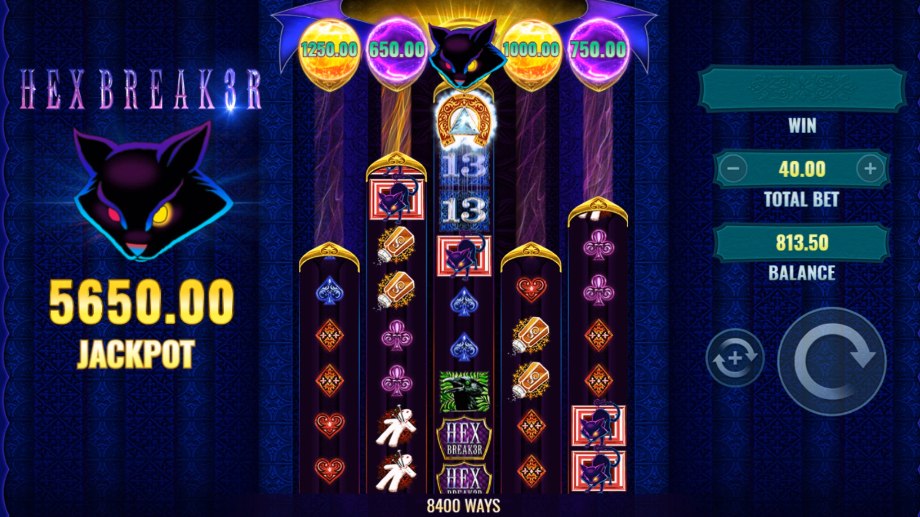 At the top of each reel is the Luck Zone. When a reel is fully expanded at 9 symbols high, you’ll win the prize amount shown in the orb.

If the orb contains the word Bonus, you’ll trigger the Free Spins feature. If the orb features a Black Cat, you’ll win the jackpot prize. The value of the jackpot is shown in the meter to the left of the reels. When a reel reaches an orb, it resets to its original 3-high size for the following spin. 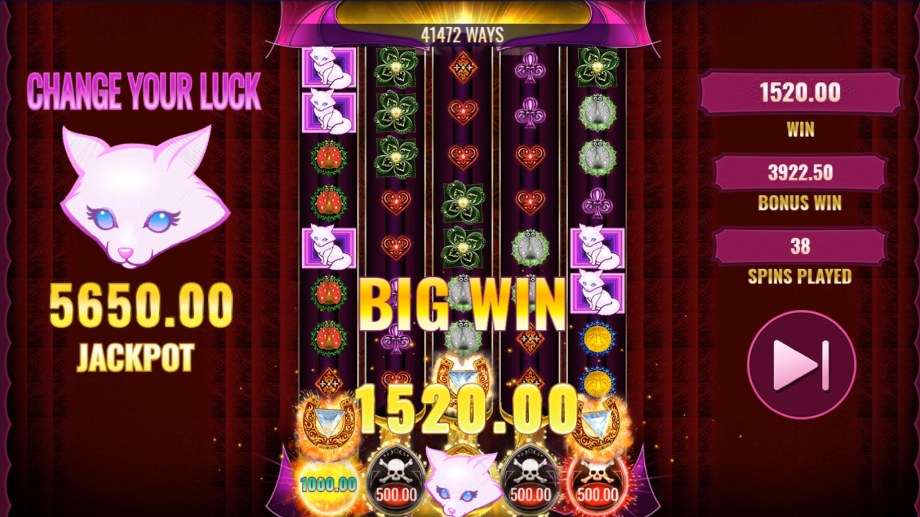 The Free Spins Bonus feature is triggered via the Bonus symbol in the Luck Zone or by landing 3 bonus symbols on reels 2, 3 or 4 on the same spin.

The feature begins with 5 reel and 243 ways to win. Just like in the base game, horseshoe symbols expand the game grid and add to the number of ways to win. Instead of going up though, the reels head down towards the Jinx Zone.

Once again, there are cash prizes up for grabs when a row reaches an Orb. These can be anything up to 62.5 x stake. Reaching the White Cat awards a jackpot prize. Each reel resets to 3 rows high after it has reached an Orb.

On any free spin, you could benefit from the Symbol Replacement feature. These transform into the same matching symbol and can be anything apart from the wild, bonus or horseshoe.

The feature ends when a row reaches the Skull which can also pay up to 18.75 x stake. You’ll then return to the base game.

It took us a little while to get used to the rather unusual gameplay in the Hexbreak3r slot. The expanding reels, Luck Zones and Orb prizes are far removed from a classic fruit machine.

The gameplay isn’t as complex as it first appears though. Even so, a few spins in demo mode are recommended. When you get accustomed to the shape-shifting reels and unorthodox prize triggers, there’s some solid action on offer here. It’s got a silly name but Hexbreak3r is a playable enough luck-themed slot.

The Hexbreak3r slot is popular land-based game. You should also check out some of IGT’s most popular games like Cleopatra and White Orchid. These are 2 of the most played slots ever, both online and in Las Vegas casinos.

What is the Hexbreak3r RTP?

The Hexbreak3r RTP is an above average 96.5%. Most slot games hover around the 96% mark this game pays out more per spin on average. The variance is in the middle meaning balanced payouts throughout.

What is the Hexbreak3r max win?

The maximum payout is 6,144 x your total stake per spin. This can be achieved by expanding the reels to give you up to 59,049 ways to win. This triggers the Luck Zone feature where the free spins and fixed jackpot prizes can be won.

Is there a Hexbreak3r free spins feature?

Yes, trigger the Free Spins Bonus feature by landing 3 bonus symbols or by expanding a reel so it reaches a Bonus Orb. The number of free spins varies each time. The feature continues until you reach a skull in the Jinx Zone.

What are Luck Zones?

At the top of each of the 5 reels is the Luck Zone. These are made up of Orbs which can award cash prizes, entry to the free spins or a jackpot prize. Each time a horseshoe symbols lands, it increases the length of that reel by 1. When a reel expands to reach the Luck Zone, you’ll win the prize in the Orb.