Based on the ancient, mythical creature, the Griffin’s Throne slot is powered by IGT and comes with 5 reels and 30 paylines. Playable from 75p a spin on all devices, there’s a sun symbol which triggers the Multiplier feature. Multipliers up to 10x can apply to your wins. This also occurs in the Free Spins Bonus feature where you play with an extended 90 payline reel set and you can win up to 150 free spins in total. Are you brave enough to gain entrance to the Griffin’s Throne?

Where to Play Griffin’s Throne Slot

The Griffin’s Throne slot begins with 5 reels, 4 rows and 30 paylines. A win is created by landing matching symbols starting from reel 1 across adjacent reels.

The stake levels cater to those with deeper pockets as the minimum stake is 75p per spin with the maximum being £2,250 a spin. If you wish, there’s a very simple Auto Spins feature where you can choose between 10 and 50 auto spins. It will stop if you trigger a bonus feature or the max win is achieved.

The Griffin’s Throne RTP is 96.05% which is in the default range for an online slot. Medium to high variance wise, the bigger wins will come in Free Spins Bonus feature where the number of paylines increases to 90 and the Multiplier can come into play. The max win is 3,750 x stake which can come from each free spin. 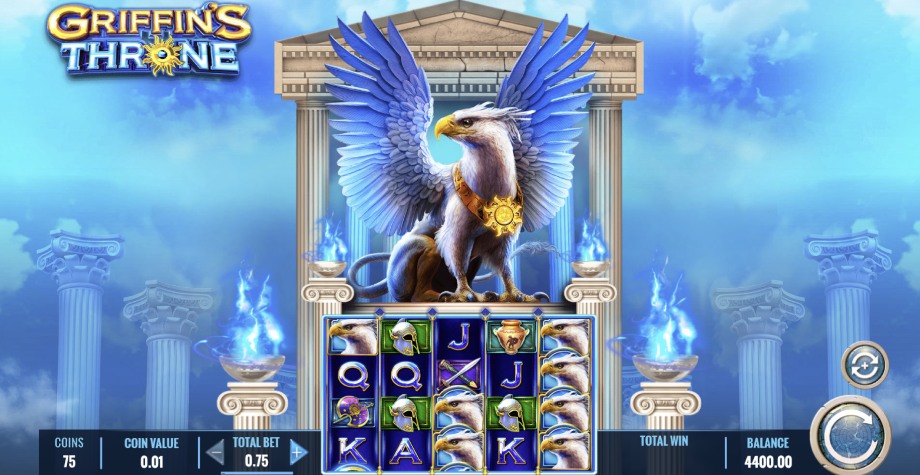 The Griffin’s Throne slot has an ancient Greek mythology theme as it’s based on the griffin creature. The legendary creature has the body, tail and back legs of a lion as well the head, wings and talons of an eagle. The griffin stands guard at the template to protect treasures. It appears proudly above the reel set.

Beautifully designed, Griffin’s Throne has a very epic feel to it. The soundtrack is intense adding to the majestic nature of the griffin. Symbols on the reels include A, K, Q, J, 10 and 9 royals. You will also see swords, shields, vases, helmets and the griffin himself. The griffin is the most rewarding symbol giving you 1.66 x stake for 5 in combination. It does appear stacked.

There is also a wild symbol which appears on reels 2, 3, 4 and 5. It substitutes for all symbols except the scatter, sun symbol and the various multipliers.

Visually, it’s one of the best slots you’ll come across. This is particularly true when playing on a mobile device. The majestic creature standing above the reels looks great on smartphone screens. Griffin’s Throne can be played on desktop, tablet and mobile devices.

The Griffin’s Throne slot comes with 2 bonus features. You have a Multiplier feature where the sun symbol adds a 12 high column with multipliers up to 10x. This applies in the free spins where there’s up to 150 to be won on a 90 payline reel set. 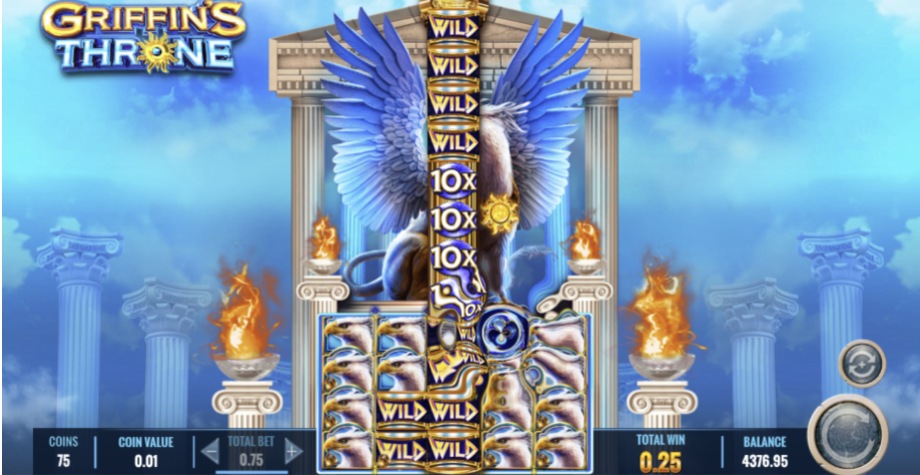 Look out for the sparkling sun symbol as this will trigger the Multiplier feature when appearing anywhere on the reels in the base game or free spins. Up to 5 sun symbols can appear on any spin with only 1 sun symbol appearing on each reel.

Once triggered, you will see all the griffin and wild symbols lock in position. A reel with a sun symbol will transform into a 12 symbol-high golden pillar. This will contains wilds and 2x, 3x, 5x and 10x multiplier wilds only.

You will then get a free respin where extra random wilds can appear. If more than 1 multiplier symbol is part of a win, the multiplier values are added together. 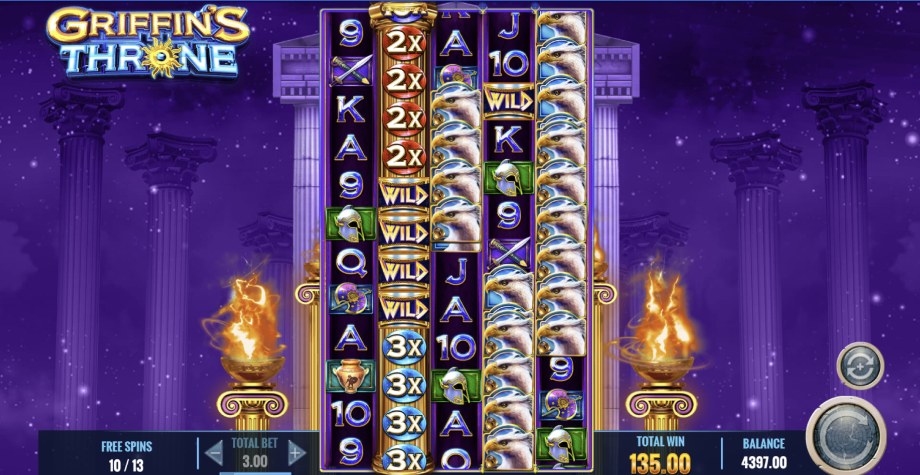 Griffin’s Thrones comes with a Free Spins Bonus feature which is triggered by landing 3 or more temple scatter symbols anywhere on the reels. With 10 free spins awarded, the number of paylines increases to 90 as all reels are 12 symbols high.

If you get 2 or more temple scatters, you will win additional free spins. 2 or 3 scatters will give you 3 or 10 extra free spins. There’s up to 150 free spins to be played with in total.

Like in the base game, the Multiplier feature is triggered when the sun symbol appears anywhere on the reels. With a respin awarded, between 6 and 13 positions can transform into wild symbols. Multipliers up to 10x can be part of a win which will boost your winning potential.

Griffin’s Throne Review Summary – all about the sun symbol

The Griffin’s Throne slot is one of the best looking games you’ll come across. It looks particularly good on mobile devices due to the layout. In terms of the gameplay, its all about the sun symbol which leads to the Multiplier feature.

The multipliers will do the most damage in the free spins as you’ll play with 60 more paylines. With potential wins of 3,750 x stake per free spin, plenty of retriggers are available to give you up to 150 free spins. Overall, quite a simple slot which has 2 majestic bonus features. The only negative is the high minimum stake of 75p per spin.

If you like ancient Greek mythology theme, there are plenty of slots to choose from. Blueprint Gaming’s Mighty Griffin Megaways is recommended. Want more griffins? The Age of the Gods: Glorious Griffin slot by Playtech has a superb free spins feature and 4 progressive jackpots.

What is the Griffin’s Throne RTP?

The Griffin’s Throne RTP is 96.05%. Average for an online slot, the variance is in the medium to high range meaning you’ll get smaller wins most of the time. The bigger wins will come from the 2 bonus features.

What is the Griffin’s Throne max win?

The most you can win from a Griffin’s Throne spin is 3,750 x your total stake. This can be won in the Free Spins Bonus feature as you’ll play with 90 paylines and there’s potential for multipliers.

Is there a Griffin’s Throne mobile slot?

What are the Griffin’s Throne bonus features?

Land a sun symbol to trigger the Multiplier feature which can give you multipliers up to 10x. In the Free Spins Bonus feature, you play with 90 paylines with the multipliers also applying.