Head to the beautiful hillsides of ancient Athens in the Golden Goddess slot,  a 5 reel, 40 payline game from IGT. This simple slot has proved a big hit with players in brick-and-mortar venues and has also spawned an online Mega Jackpots version. The gameplay here is very simple with super stacked symbols central to much of the best action. The main extra is the Free Spins Bonus feature where only 1 symbol spins in fully stacked formation throughout. Find out all you’ll need to know about this low variance slot in our complete Golden Goddess review.

Where to Play Golden Goddess Slot

Stake levels range from 40p to £1,200 per spin. The higher bet level is eye-watering and not offered at all slot sites. Use the + and – buttons in the Line Bet box to adjust your stake size accordingly. There’s a simple Auto Spins option where between 10 and 50 autospins can be used. This option may or may not available in your jurisdiction.

The Golden Goddess RTP is 96% which is bang on average. Saying that, it’s high compared to land-based slots that find themselves online (normally around the 94-95% range).

In an age when more and more developers are ramping up the variance, the volatility is extremely low. Expect plenty of smaller wins. It’s very unlikely that you’ll land a massive score playing this slot though. It’s a good pick for casual players, despite relatively high minimum bet level. The max win is 1,000 x your total stake per spin. 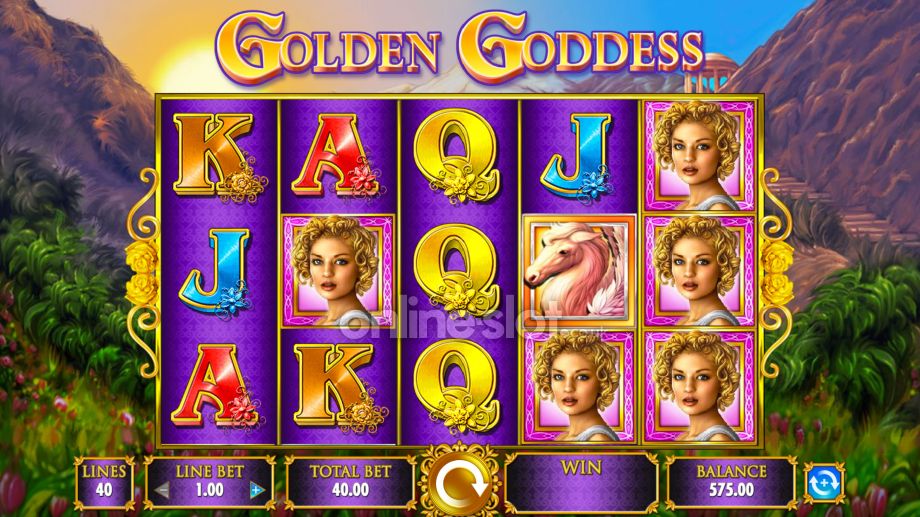 In keeping with many games in the IGT online catalogue, the design in the Golden Goddess slot is very simply done. With an ancient Greek mythology theme, you can certainly tell that this is a game that has roots in live venues.

With the mountains of ancient Greece in the background, there’s a rather basic, cartoonish quality to the design here. It’s certainly not the most sophisticated slot you’ll play as far as visuals are concerned. The symbols are all nice and clear though and the action is simple to follow. It’s starting to look its age but the Golden Goddess visuals are still decent enough to play.

The reels are made up of lower value A to 10 royals, which appear alongside a horse, a white dove, the Golden Goddess of the title and her handsome other half. The Golden Goddess is the most lucrative standard symbol, paying 1.25 x your total stake if you land 5 on a payline.

That doesn’t sound like much but remember that stacked symbols are in play here so expect to see plenty of big clusters of matching symbols.

Potentially far more rewarding is the Golden Goddess logo symbol which is the game’s wild. This replaces all the standard symbols when it makes up part of a winning combination and can land on all 5 reels. Land 5 wilds across a payline for an award of 25 x your total stake.

Like many IGT-powered slots that started life in live venues, the gameplay in Golden Goddess is very simple. This isn’t a slot that’s overloaded with bonuses and feature rounds. With 2 bonus features, gameplay highlights include stacked symbols and a free spins round.

Top of the bill as far as gameplay in Golden Goddess goes is the Super Stacks feature. Before each spin, each reel is filled with a randomly chosen Super Stack of symbols. This can be any symbol including the wild but not the rose scatter. It’s possible to land multiple reels of the same stacked symbols which can deliver some knockout rewards. 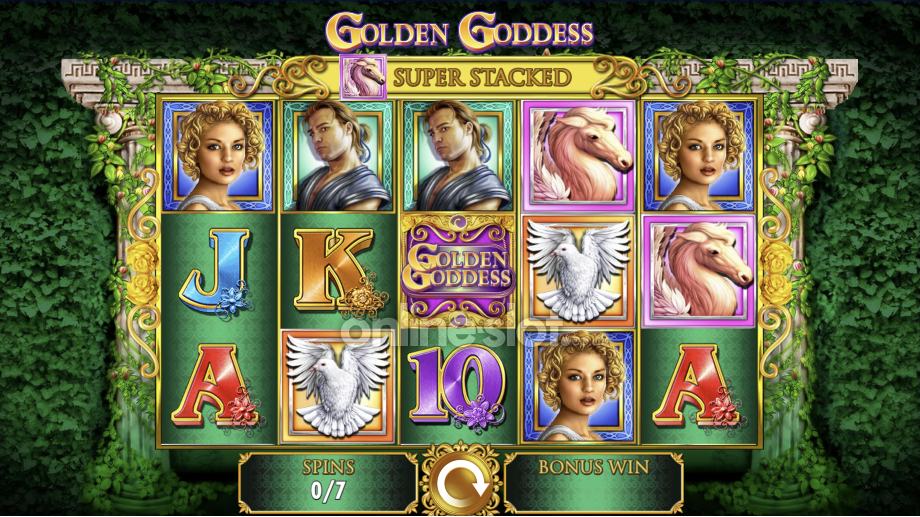 Super Stacks are also a key element of the main feature offering, the Free Spins Bonus feature. To trigger this round, you have to fill all of the middle 3 reels with red rose scatter symbols. You’ll then receive 7 free spins.

Before the round starts, pick a rose which reveals 1 of the 4 higher paying character symbols. This chosen symbol will be the Super Stacked symbol for the duration of the free spins. There are no Bonus symbols in play during the free spins so no retriggers are possible here.

If you’re after varied gameplay, innovative extras and plenty of explosive feature then the Golden Goddess slot probably isn’t what you’re looking for. You’ll be better served playing the top slot games like Dead or Alive 2, Book of Dead or San Quentin.

Both the design and gameplay here are very straightforward too. The volatility is very low too. It’s probably a good pick for a casual player as you’ll likely get some decent play for your investment. Golden Goddess is recommended for players who have played this in land-based casinos.

If you’re chasing a big score then the MegaJackpots Golden Goddess version might be more to your liking courtesy of the potential progressive jackpots it offers.

However, the simple formula remains a popular one with many players and if you want a basic slot with a classic theme, Golden Goddess delivers just that. There are better Las Vegas favourites though with IGT’s Cleopatra recommended which comes with 10,000 x stake max wins.

If you want Greek mythology, Age of the Gods by Playtech comes with 4 free spins features, 50,000 x stake top payouts and 4 progressive jackpots.

What is the Golden Goddess RTP?

The Golden Goddess RTP rate is 96%. Whilst this average, land-based games are normally between the 94-05% mark so it’s higher. The variance is low ensuring your bankroll will last quite a long time.

What is Golden Goddess max win?

The maximum win per spin is 1,000 x your total stake. This can be achieved if you fill the reels with the highest value symbol, the Golden Goddess logo.

Are there any Golden Goddess free spins?

Yes, trigger the Free Spins Bonus feature by fill all of reels 2, 3 and 4 with red rose symbols. Pick a rose to reveal 1 of the 4 higher value symbols. A high value symbol will be the stacked symbol for the 7 free spins that follow.

Is there a Golden Goddess demo?

Yes. The Golden Goddess free play can be played here at Online-Slot.co.uk. Revamped using HTML5 technology, it can be played on mobile, tablet and desktop devices.