Sandals at the ready, we’re off on another Saharan adventure in the Crown of Egypt slot. Created by IGT, it’s a 5 reel, 40 payline game. Double your stake per spin though and you can change the game mechanic so that it also offers 1,024 ways to win. Regardless of what machine you’re using, the only feature round here is the Free Spins Bonus feature where up to 130 free spins can be won. Find out all you’ll need to know about this lavishly designed slot that’s ideal for casual players in our deep dive Crown of Egypt review.

Where to Play Crown of Egypt Slot

You’ll have the choice of 2 different game engines when you play the Crown of Egypt slot. The default setting is the 5 reel, 40 payline machine. Winners here are formed by landing 3, 4 or 5 matching symbols or wilds on a payline, starting from the leftmost reel. This will set you back between 40p and £120 per spin.

Alternatively, you can up your stakes to between 80p and £240 per spin and add a 5 reel, 1,024 ways to win machine. Known as the MultiWay game mechanic, winners are formed by landing 4 or 5 matching symbols or wilds on adjoining reels, starting from reel 1. They don’t have to be in specific positions, anywhere on the reel will do.

The paytable differs depending on which game engine you’re using. Wins on the 1,024 machine come on top of the standard payline wins. You can switch between the 2 by clicking on the button in the bottom left-hand corner of the screen.

Click on the arrows in the bottom right-hand corner of the screen to set up autoplay. You can set between 10 and 50 autospins if required. These stop automatically whenever you trigger the Free Spins Bonus feature. .

The Crown of Egypt RTP is 95.08%. The setting here might be hot and sultry but you would call Crown of Egypt a scorcher when it comes to variance. The volatility is on the low side of medium. You can expect plenty of smaller wins here. The max win is 5,000 x your total stake per spin. 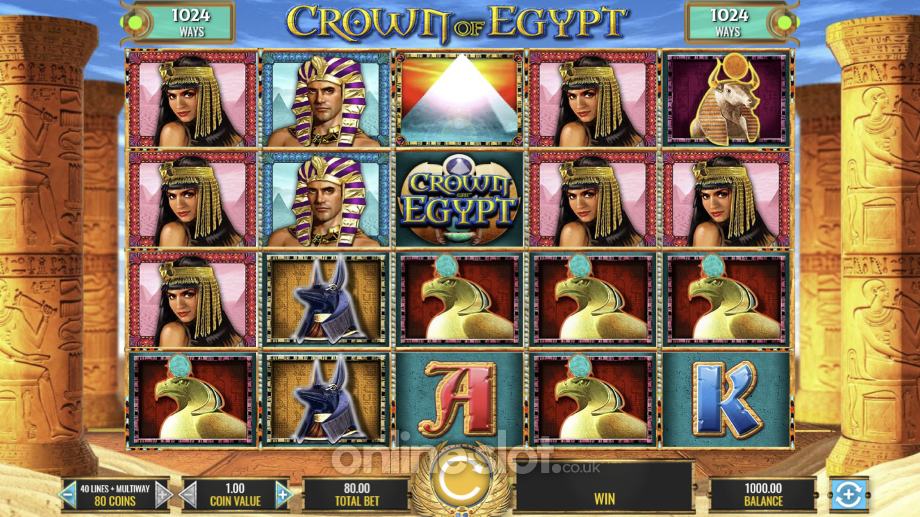 With an ancient Egyptian theme, the sound and visuals in the Crown of Egypt slot are impressively done. The setting is the interior of a pyramid. The action plays out to a rather haunting backing track which is a good fit for the theme.

Released in 2012, it’s a popular brick and mortar casino slot like many games in the IGT catalogue. I’ve not always been that impressed with the design of IGT slots but they’re done a nice job of recreating the ancient world here.

On the reels, you’ll see A to 10 playing cards, three 3D Egyptian hieroglyphs, a Pharaoh and the Egyptian Queen. The Egyptian Queen is the most rewarding symbol. Rounding out the symbols is the Scarab Beetle which is the game’s wild. It appears on reels 2, 3, 4 and 5 only and replaces all symbols with the exception of the bonus triggering scatter.

If you want to play Crown of Egypt on a smartphone, you’ll be able to do so on a fully optimised mobile version. The crisp imagery and simple gameplay work very nicely on the Crown of Egypt mobile slot.

There’s not a huge amount to report when it comes to the features in the Crown of Egypt slot. The only extra is the Free Spins Bonus feature where you can look forward to up to 130 free spins. 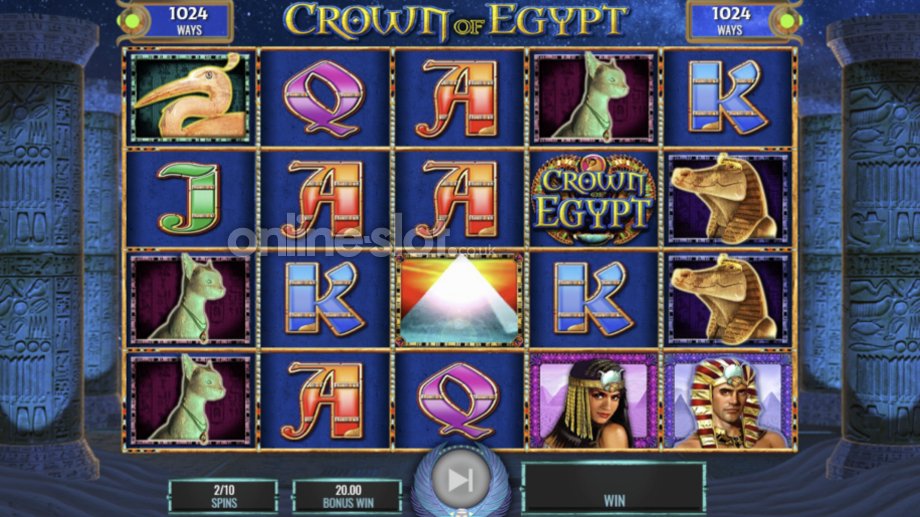 The Free Spins Bonus feature is triggered in a slightly unusual manner. To activate it, you need to land 2, 3 or 4 pyramid scatters on the middle reel. The more scatters, the more initial free spins:

Landing 2 or more scatters on the middle reel during the feature results in a retrigger and another round of free spins. The maximum number of free spins is 130.

Just like in the base game, the paytable is different depending on whether you’re playing using the 40 payline or the 1,024 ways to win game engine. A screen full of Egyptian Queen symbols will result in a 5,000 x stake payout.

This isn’t the most exciting trip to the land of the Pharaohs I’ve taken. That goes for design, features and volatility. The visuals are fine and so too is the Free Spins Bonus feature. That’s pretty much all there is to say. It’s fine. Nothing special but perfectly solid.

The MultiWay game mechanic offers the chance to add an extra layer to the gameplay. It wasn’t really enough to win me over though. The Crown of Egypt slot is a pretty tame affair compared to newer slots with the same theme.

If you want a good ancient Egyptian themed title, Book of Dead by Play ‘n GO is a popular choice. Another option is the Mystery Museum slot by Push Gaming which comes with 17,500 x stake wins and a high 96.58% RTP.

What is the Crown of Egypt RTP?

The Crown of Egypt return to player rate is 95.08%. Lower than most online slot games, the variance is in the low to medium range meaning your bankroll should last a relatively long time.

What is the Crown of Egypt max win?

The biggest possible win is 5,000 x your total stake. This can be achieved in the Free Spins Bonus feature by filling the reels with the high value Egyptian Queen symbol.

Is there a Crown of Egypt free spins feature?

Yes, the Free Spins Bonus feature is triggered by landing 2, 3 or 4 scatters on the middle reel to give you 10, 15 or 20 free spins. Retriggers are possible too, with a maximum of 130 free spins possible.

What is the MultiWay game mechanic?

You have the chance to play using 2 different game engines. There’s the standard 5 reels and 40 paylines. Double your stake for the MultiWay mechanic which also brings a 1,024 ways to win into play and bigger potential wins.