Join a young hero called Brin who attempts to defeat the evil Gunnhild in the Hammer of Fortune slot, a 6 reel, 50 payline game from Green Jade Games. There’s a skill element to this fantasy-themed saga where using a charged hammer can clear out unwanted symbols an unlock Loot Chest prizes which can reach a maximum of 10,000 x stake or win up to 120 free spins. Find out all you’ll need to know about this unusual slot in our full Hammer of Fortune review.

Where to Play Hammer of Fortune Slot

This fantasy epic is played on a 6 reel, 4 row machine that offers 50 paylines. Winners are created by landing 3 or more matching symbols or wilds on a payline, starting from the leftmost reel.

You can start this quest at stake that range from between 10p and £100 per spin. Use the + and – buttons in the bottom right-hand corner to adjust. For autoplay, click on the settings in the top right-hand corner. You can run between 10 and 1,000 autospins. There are various stop limits which relate to wins, losses and feature triggers. It’s all very straightforward to set up.

The Hammer of Fortune RTP is 94.99% which is low compared to the 96% slots average. At the higher end variance wise, it offers maximum wins of 10,000 x your total stake. 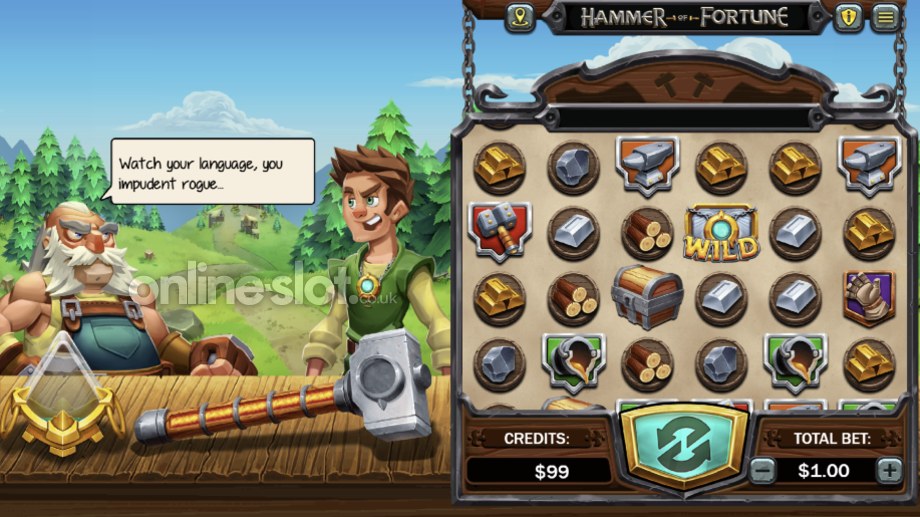 There’s a mediaeval feel to the design in the Hammer or Fortune slot. The game’s story is based around a young hero (called Brin) who aims to save his village from Gunnhild, who was known is Icelandic Sagas as the Mother of Kings.

The visuals have the look of a social media game and are nice and clear. The action plays out to a suitably fantastical soundtrack which again, is a good fit for the theme.

The reels a packed into the right side of the screen. On the left is a path and of course, the mighty hammer. On occasions, you’ll see an animated Brin and his blacksmith father appear here and play out a little conversation which advances the back story. They can also give tips on how to use the hammer.

Around every 50 to 75 spins, you’ll progress to a new part of the realm. It does have any impact on return rates but freshens things up visually.

On the reels themselves, you’ll find gold and silver bars, emeralds, a blacksmith’s glows, tongs, bellows, a smelting pot and an anvil. The top standard symbol is the hammer which awards 100 x your total stake if you land 5 on a payline. There’s also a wild that can land on reels 2, 3, 4, 5 and 6 only.

Hammer of Fortune has been optimised for play on tablets and smartphones as well as standard desktop and laptop computers. You’ll see the animated dialogues alongside the reels on all devices. It can feel a little packed in but overall, the design works well enough.

In the Hammer of Fortune slot game, unlocking treasure chests is the name of the game. These can award cash prizes which can reach and enormous 10,000 x stake or they can trigger a bonus round where you’ll play up to 120 free spins. Helping to unlock the treasure chests is the special Knockout Mechanic where the mighty hammer can shift symbols to create winning positions. 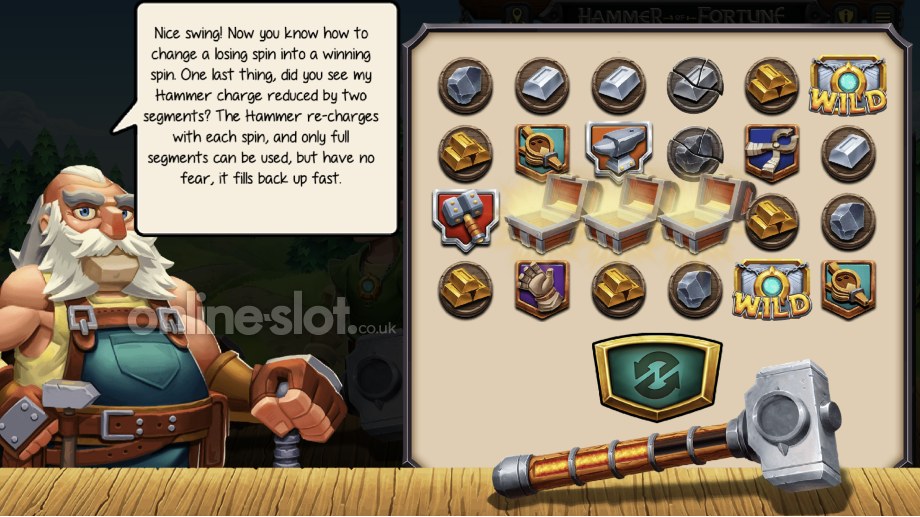 Land 3 or more Loot Chest symbols in a horizontal line (they don’t have to start on reel 1) and you’ll trigger the Loot Chest feature. This will reward you with a cash prize or a certain number of free spins:

To the side of the reels you’ll see a hammer. The more you spin, the more the hammer gets charged. When the hammer is fully charged, you’ll be able to use it to smash symbols off reels to try and create horizontal lines of Loot Chest symbols. With it, you can win the cash prizes and free spin triggers listed above. This is known as the Knockout Mechanic feature.

The Loot Hammer can contain up to 5 charges. Choose which symbols you want to remove then take a swing. The more Loot Chests you manage to line up in a horizontal line, the better the potential awards that await.

There’s a strategy element to this feature. You can use the hammer when you wish. You might have to be patient but some judicious swings of the hammer can deliver some top combinations with prizes to match.

Hammer of Fortune Review Summary – simpler than it reads

Green Jade Games has tried to do things different in the Hammer of Fortune slot, packing it with back story and adding a skill element to the proceedings.

With all the changing locations, cartoon animations, hammer charges and Knockout smashes, the key to winning big is from the Loot treasure chests which can deliver 10,000 x stake payouts or up to 120 free spins. The max win per spin is a decent 5,000 x stake (by filling the reels with the hammer symbol).

I think this will be something of a marmite slot. You will either love it or hate it. If you fancy a virtual trip to the middle ages that offers design and gameplay that’s a little different from the norm, that’s just what you’ll get from Hammer of Fortune.

I recommend you try the Rednex K.O slot by Green Jade Games which uses the infamous Cotton Eye Joe song as its inspiration and has more bonus features. If it’s medieval adventure you crave, you cannot go wrong with Dragon Born Megaways from Big Time Gaming as it was the first ever Megaways title.

What is the Hammer of Fortune RTP?

The Hammer of Fortune return to player rate is 94.99% which is rather low compared to the average of around 96%. The variance is in the medium to high category.

What is the Hammer of Fortune max win?

The most you can win in this medieval offering is 10,000 x your total stake. This can be won from the Loot treasure chests. There’s also 5,000 x stake wins from each spin.

Is there a Hammer of Fortune free spins feature?

Triggered via the Loot Chest feature by landing 3+ treasure chests on a horizontal line, you can win cash prizes up to 10,000 x your total stake or between 4 and 120 free spins.

Is there a Hammer of Fortune mobile slot?

Yes, you can play Hammer of Fortune on a smartphone device as well as on a laptop or desktop computer or on a tablet. You can try the game for free on any device you wish.