Where to Play Twisted Turbine Slot

The Twisted Turbine slot is played on an unusual 5 reel machine that’s set up in a 5x3x1x3x5 formation. There are 225 ways to create a winner.  Land 3 or more matching symbols on adjoining reels to create a winner. These combinations don’t have to start from reel 1 either.

Stake levels here range from between 20p and £50 per spin. Click on the coins and adjust accordingly. Click on the arrow above the spin button for autoplay. You can run between 5 and 100 autospins. There are options to set win and loss stop limits too.

The Twisted Turbine RTP is 96.51% which stacks up well against the 96% slot average. We found the volatility to be high with a hit frequency of 20.78% (meaning just over 1 in 5 spins will result in a winner. The max win is 9,518.7 x your total stake which will come in the free spins with the potential 50x multiplier. 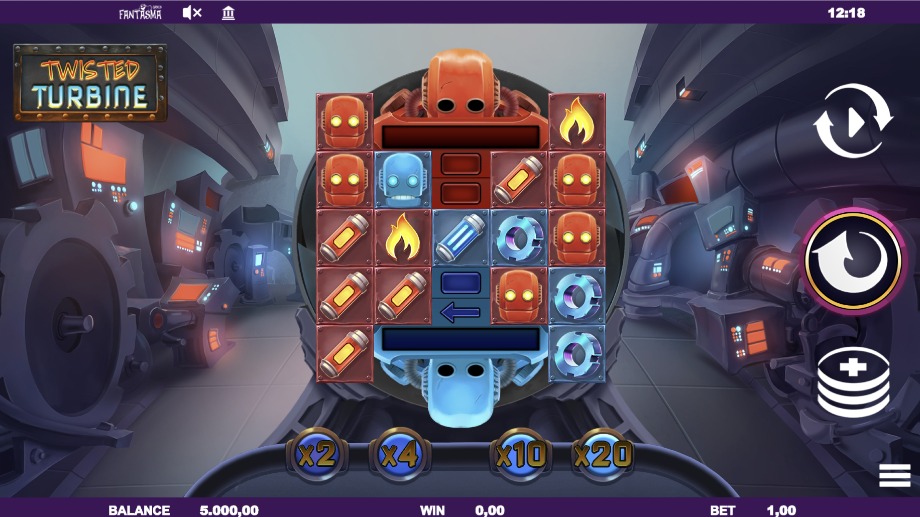 There’s a strong industrial feel to the design of the Twisted Turbine slot. A giant hangar packed full of machinery and instruments forms the backdrop to the action.

The imagery is quite simple but it works well. There’s a Kraftwerk style soundtrack playing as you spin. There’s an option to silence the soundtrack and play with just the effects if you’re not a fan of Teutonic-inspired techno pop.

The reels are set within a turbine. There you’ll find red fire symbols and blue electrical symbols which all relate to the engineering theme. The most lucrative symbols are the blue and red robots which pay 0.25, 0.75 or 2 x stake for 3, 4 or 5 in combination. There is also a wild symbol which substitutes for all symbols mentioned.

Twisted Turbine can played on desktop, mobile and tablet devices. With high definition graphics and animations, the mobile version is particularly clear.

In Twisted Turbine, the gameplay is unusual and takes a bit of getting used to. It takes familiar elements like avalanche reels but gives them a twist (in this case, literally). This can bring multipliers and free spins into play. Let’s take a closer look.

When a winning combination is formed, the successful symbols are removed and new ones drop in and replace them. Known as the Avalanche feature, these continue until no new winner is created. You can only create winners made up either of fire or electrical symbols in a single set of avalanches. This is determined by the symbol on the middle reel.

You’ll notice a pair of Turbine Robots (Fire and Electrical) that sit at the top and bottom of the reels. Each one has a meter. Land a winner made up of fire symbols and it fills 1 position on the Fire Robot’s meter. The same applies to the Electrical Robot when you win with electrical symbols.

Known as the Turbine Robot Credit Win feature, you’ll win a prize equal to 1 x your total stake every time you fill the 2 parts of a robot’s meter in a single set of avalanches. The meter then resets to 0. 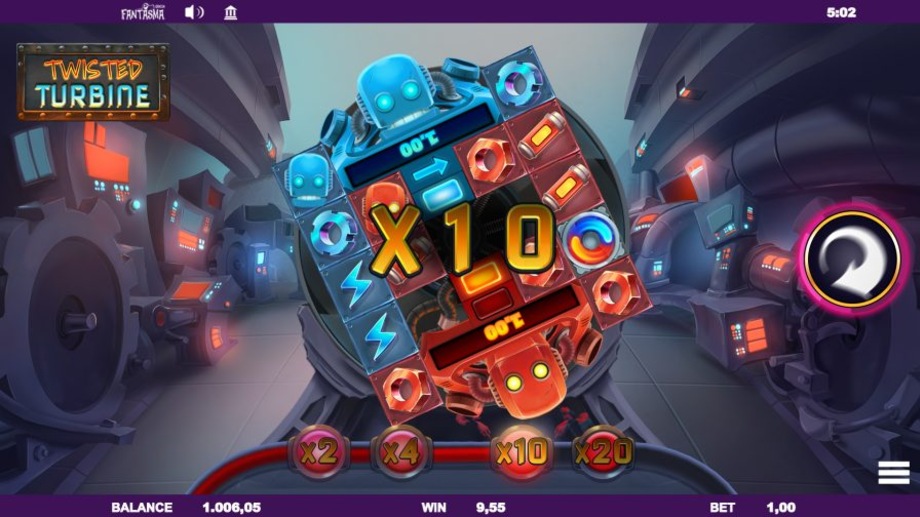 The Twisted Turbine feature is where things get a little strange. Fill the meter of the Robot at the bottom of the screen and reels flip 180 degrees. The avalanches then continue as normal. More importantly, each Rotation within a single set of avalanches brings an expanding multiplier into play.

In the base game, the Rotation Multipliers are 1x, 2x, 4x, 10x and 20x. You can check what the multiplier currently stands at in the meter at the bottom of the screen. The multiplier resets to its standard 1x at the start of each spin. 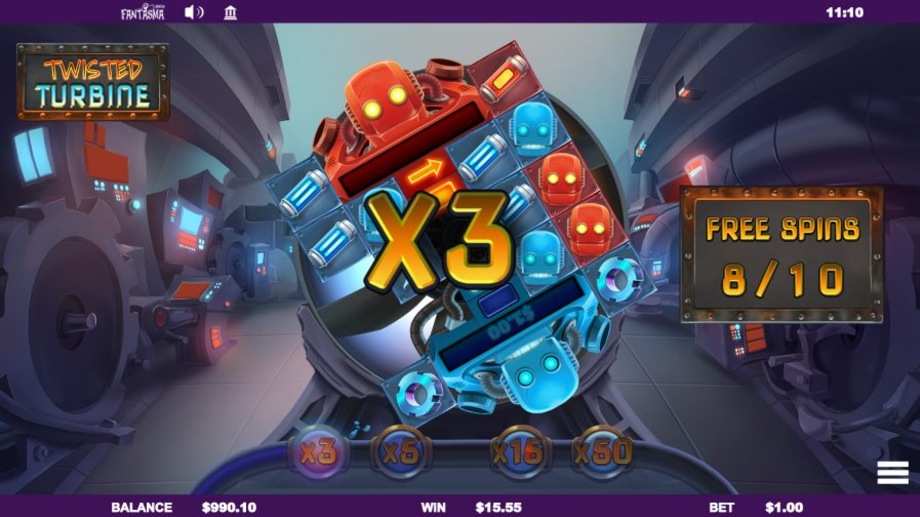 Land 3 or 4 bonus symbols on the same spin and your reward is 10 or 15 free spins in the Free Spins feature. The Turbine Robot Credit Wins feature is in play during the feature.

So too is the Twisted Turbine feature. The potential multipliers on offer are even bigger in the free spins than the base game. Each free spin starts at 1x but can rise to 3x, 5x, 15x or even 50x if you get on a roll with the reel flips.

Retriggers are possible too. Landing 3 or 4 bonus symbols adds another 10 or 15 free spins to your total, with no limits.

The features in the Twisted Turbine slot can take a little getting used to. It took us a while to work out just when the reels would flip and how the meter bonuses were awarded. This is a slot where you’ll definitely benefit from having a look in demo mode/free play.

When we did get accustomed to the rather strange set up and features, we found plenty to like. That’s certainly the case if you like volatile gameplay. Twisted Turbine is a high variance slot. The bigger wins will come from the multipliers and especially in the Free Spins feature as they can reach 50x.

The unorthodox gameplay is welcomed. If you’re a fan of simple, classic fruit machine-style slots, this might be a little too out there. If you fancy trying something a little different, Twisted Turbine certainly offers that.

You should also try the Serpent Shrine slot by Fantasma Games which is also unusual but offers a high RTP, big potential wins and up to 16,807 ways to win.

What is the Twisted Turbine RTP?

The Twisted Turbine return to player rate is 96.51%. That puts it slightly above the average. Highly volatile, it comes with a 20.78% hit frequency rate meaning over 1 in 5 spins will give you a win.

What is the Twisted Turbine max win?

The most you can win from a single spin is 9,518.7 x your total stake. The key to winning big is from the Twisted Turbine feature which can give you multipliers up to 50x in the free spins.

How does the Twisted Turbine feature work?

The Twisted Turbine feature comes into play when you fill the Robot meter at the bottom of the screen. With the reels flipping 180 degrees, each rotation within a set of avalanches adds an expanding multiplier which can reach 20x in the base game and 50x in the free spins.

Is there a Twisted Turbine free spins feature?

Yes, trigger the Free Spins feature by landing 3 or 4 bonus symbols on the same spin. You’ll then receive 10 or 15 free spins, complete with potential multipliers that can reach up to 50x.