Prizes of up to 10,000 x your stake from a single spin are possible in the Serpent Shrine slot, an unusual game from Fantasma Games that takes players on a journey through a magical forest. Played on a grid where some symbol positions are locked, land butterflies and bombs which can open up symbol positions to boost your winning chances. There’s also a free spins round with increasing multipliers. Defeat the snake and you could get 2 extra spins on a 16,807 ways to win machine with a 100x multiplier. Discover more in our in-depth Serpent Shrine review.

Where to Play Serpent Shrine Slot

The action in the Serpent Shrine slot takes place on a 5 reel, 7 row machine. Many of those symbol positions will be blocked at the start of a spin though. The setup is 2x3x3x3x2 which offers 108 ways to win. Land 3 or more matching symbols on adjoining reels to create a winner. This can lead to a maximum of 16,807 ways to win.

Stake levels range from between 20p and £50 per spin. You can set between 5 and 100 autospins as required. There are also options for win and loss stop limits.

The Serpent Shrine RTP is 96.53% which is well above the slot average. As you might expect from a slot that comes with multipliers that can reach up to 100x, Serpent Shrine is very volatile. 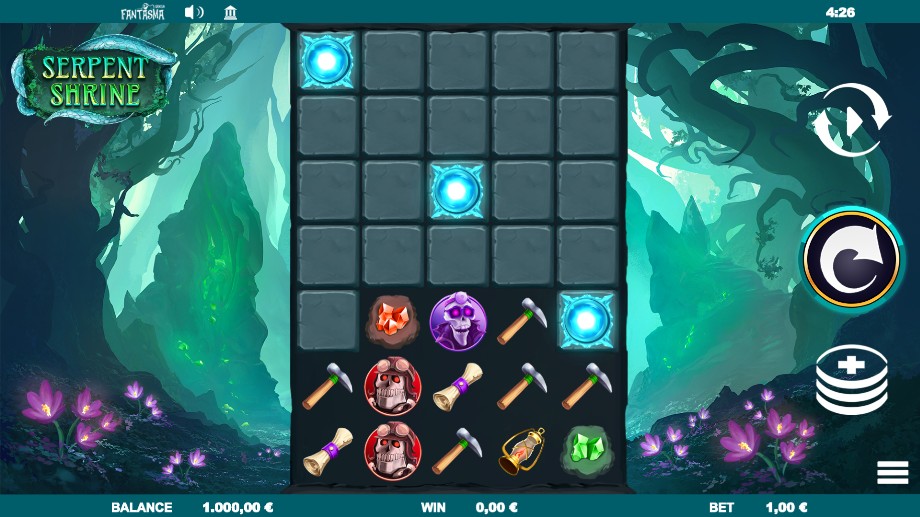 There’s a fresh modern look to the visuals in the Serpent Shrine slot which are very impressively put together. According to developer Fantasma Games, it’s set in an ancient forest where a group of lost explorers find themselves. It has a fantasy feel to it. Featuring snakes, it’s not a slot if you are ophidiophobic.

There’s a sweeping orchestral backing track playing while you spin which could come from a fantasy movie. It all combines very nicely to create plenty of atmosphere.

A mysterious forest forms the backdrop to the action. On the reels are an axe, a map and a lamp as well as 3 different gemstones. More rewarding still are the 3 skeleton-style explorers. The serpent is the most rewarding symbol. It pays 2.5, 5 or 10 x your stake if you land 3, 4 or 5 in combination. There’s also a standard wild in addition to the Butterfly Wild.

You can play Serpent Shrine on your mobile. Portrait mode is the way to go given the expanded reels. There are plenty of moving parts here but the classy visuals mean it’s still playable enough on a mobile device.

There are some potentially explosive extras on offer in the Serpent Shrine slot. The biggest opportunities come in the free spins where defeating the Serpent can deliver extra spins and enormous 100x multipliers. We’ll start by looking at the butterfly wilds.

If you manage to unlock all the symbol positions on the grid, you’ll activate the Snake Free Spins feature. We’ll look at these below, but first, the Bomb feature.

In the locked portion of the reel grid, you’ll see 3 pale blue bomb symbols. When a bomb is unlocked, it explodes and opens up all the locked symbols vertically and horizontally. A butterfly wild is created with each bomb explosion. The new butterfly wild is placed in a new position at the start of the respin that follows. 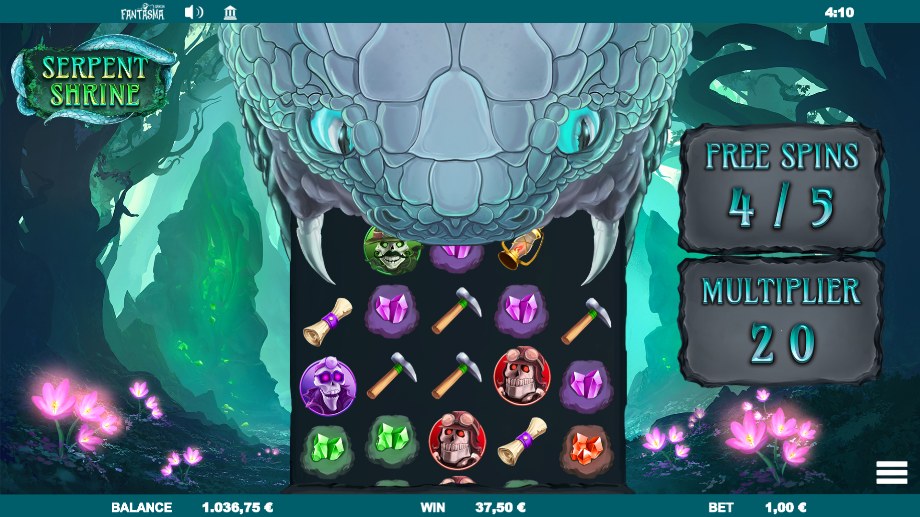 When you unlock all positions on the grid, you will trigger the Snake Free Spins feature. On in, you can look forward to 5 free spins complete with a multiplier which increases with each free spin. The multiplier can reach 100x:

Look out for a snake which covers an increasing proportion of the reels and the number of ways to win with each free spin.

If a Butterfly Wild lands during the free spins, it attacks the snake, removing one of its teeth, leaving more grid positions open for more winning opportunities. Land a third Butterfly Wild and it kills the snake and triggers the Super Free Spins feature. 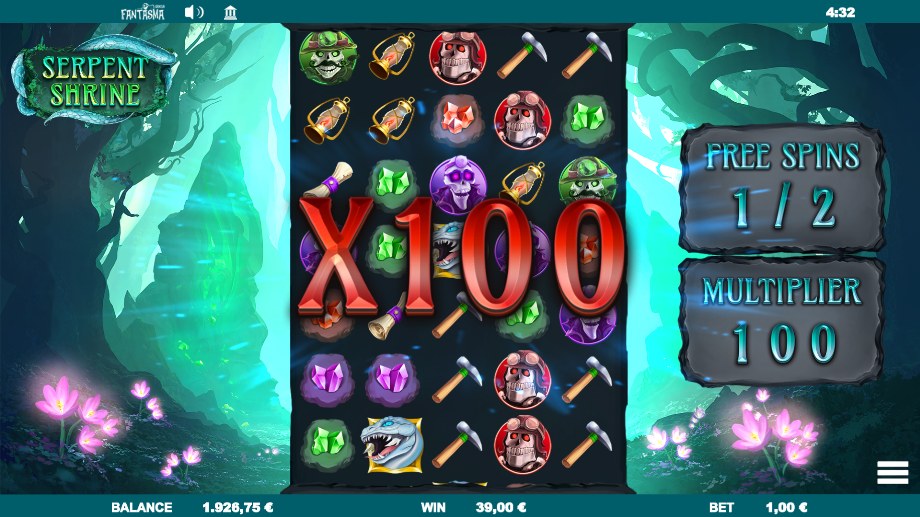 Trigger the Super Free Spins feature and you’ll receive 2 free spins. These are played on a fully opened set of reels that offers 16,807 ways to win.

That’s not all, any payouts you land here are boosted by a massive 100x multiplier.

In the Serpent Shrine slot, high class design and some unusual gameplay combine rather well. That’s certainly the case if you like high variance action.

The Serpent Shrine volatility is high. Expect spells when your bankroll will seemingly slither away. If the massive multipliers work their magic in the Snake Free Spins feature, then look out though. It’s all about the Super Free Spins feature though where you’ll play with the maximum number of ways to win as well as a 100x multiplier.

This is not a slot for people with a fear of snakes but for anyone else, Serpent Shrine is a slot worth considering. It’s similar the Hades: River of Souls slot visually (by Fantasma Games) but offers bigger potential payouts. If you like serpents, the Legend of Hydra slot by Playtech is equally as good.

What is the Serpent Shrine RTP?

The Serpent Shrine RTP is 96.53% which is above average. The 23.37% hit rate means you’ll land a winner approximately every 4 spins. The volatility here is high so don’t expect big wins often.

What is the Serpent Shrine slot max win?

Being a high variance slot, the Serpent Shrine slot offers big payouts if you get lucky – up to 10,000 x stake per spin. The key is from the multipliers in the Snake Free Spins feature which will reach 100x on your last free spin.

How does the Super Free Spins feature work?

Where can I play Serpent Shrine?