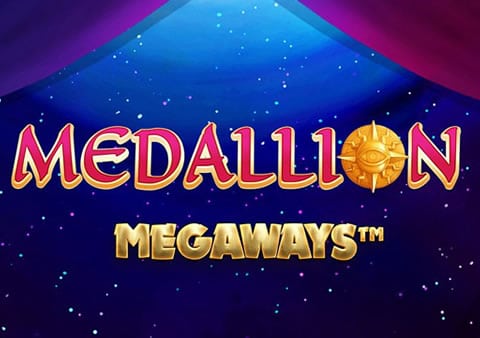 A luxurious tent in the middle of the desert is the rather unusual setting for Medallion Megaways, a 6 reel video slot from Fantasma Games where the number of ways to win varies from between 64 and 46,656 with each spin. Successive avalanche wins increase a multiplier. Look out too for expanding wilds with multipliers of between 2x and 6x, respins and a bonus round that awards free spins with expanding multipliers. Play on all devices from between 10p and £80 per spin.

The reels here appear in a 6×6 grid. The size of the symbols on each spin varies. So too do the number of active Megaways. The number of ways to create a winner can range from 64 right up to 46,656 – the more symbols per reel, the more ways to win basically. The design here is nicely done. On the reels you’ll see an assortment of gemstones, crescent moons, triangles and stars.

The Avalanche feature means that winning symbols are removed following a winning spin. The avalanches keep on coming as long as a new winner is created. Each successive avalanche win also increases a multiplier by 1x. A winless drop returns the multiplier to 1x.

There are special gemstones to keep an eye on as they have some magical properties. Look out for the medallion which can appear after any base game spin. They can activate or deactivate Feature Stones and their corresponding bonus features. There’s more info below:

The Expanding Wilds feature can be triggered by landing the purple and blue gemstone. All wilds expand to fill their reel. These expanded wilds can come with multipliers attached too which can boost payouts by between 2x and 6x per reel. Land 2 multiplier wilds together and the boost is combined. For example, 2x and 6x multipliers would deliver a 12x boost.

The Void Respin feature – is activated with the green gemstone. Between 2 and 10 symbols are removed from the reels and new symbols drop in and replace them. Wilds and symbols that are already parts of a winner can’t be removed.

The golden eye medallion triggers 10 free spins in the Free Spins feature. The Expanding Wild and Void Respin features are active during the free spins round. Each successive avalanche increases a multiplier. Unlike the base game, the multiplier doesn’t revert to 1x following an unsuccessful avalanche. It can only get higher.

This is quite an unusual Megaways slot. The design is excellent and the features offer plenty of variety. It’s not as volatile as some similar slots but the medium variance is high enough to keep things interesting – you can win 23,360 times your stake on each spin or free spin though!

If you like the Megaways mechanic but fancy some fresh features attached, then Medallion Megaways is a slot to consider. For all your Megaways needs, go to the Megaways Slots section where you’ll find all Megaways slots conveniently in 1 place.