The ancient Greek theme might be very familiar to slot players but you can expect some very unusual gameplay when you open up the Maze Escape Megaways slot. Created by Fantasma Games, it’s a 6 reel, Megaways game where all the reels shift 1 step to the left when you activate the Shifting Maze Avalanche feature. Unblock special symbols to bring other extras into play including stacked wilds that come with random multipliers of up to 7x attached. Trigger the Labyrinth Free Spins feature and you’ll play free spins with the Shifting Maze Avalanches activating following every winning spin. You could get more multiplier boosts here too. Find out more in our in-depth Maze Escape Megaways review.

The Maze Escape Megaways slot is played using the Megaways engine from Big Time Gaming. With 6 reels and 7 rows appearing, up to 6 positions on any reel are blocked at the start of each spin. You can unblock them via the Shifting Maze Avalanche feature (more on this below).

Winning combinations are formed by landing matching symbols or wilds on adjacent reels, starting from reel 1. The number of ways to win varies depending on how many positions are blocked. This changes from spin to spin. We’ll look at this more closely in the features section below.

You can enter the Maze at stake levels of between 20p and £40 per spin. Click on the coins below the spin button and pick your stake. Above the spin button is the autoplay button. Click here and you can run between 5 and 100 autospins, complete with win, loss and stop on feature limits.

The Maze Escape Megaways RTP is 96.15% which is about average. High variance, the maximum win stands at a very chunky 25,000 x stake per spin. 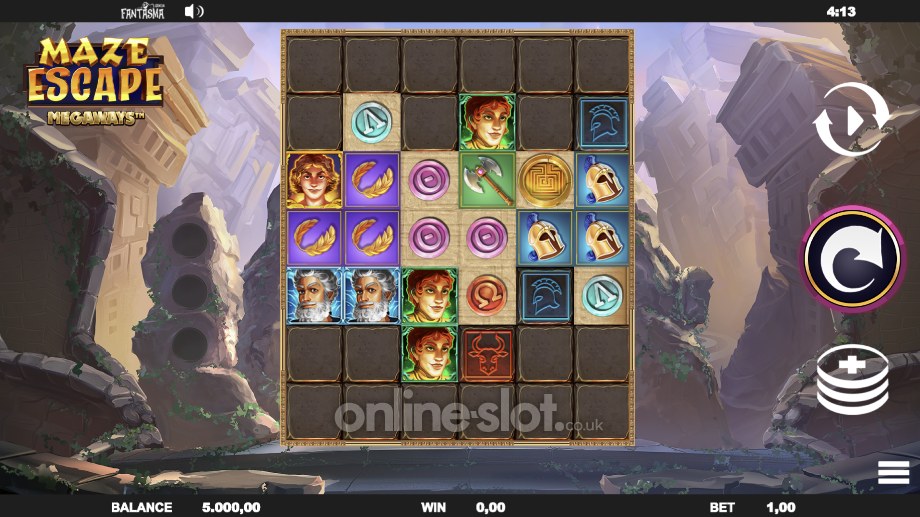 There’s a very high spec feel to the sound and visuals in the Maze Escape Megaways slot which has the look of a TV animation. With an ancient Greek theme, you will see ruined marble buildings in the background. Actually, its set in a Labyrinth which is a confusing structure which function was to hold the Minotaur monster.

The cartoon-style imagery is bright, colourful and rather nicely done. As is the sweeping orchestral score that has become something of a staple for slots with this theme. It’s catchy enough and certainly ramps up the atmosphere. No complaints about the Maze Escape Megaways design.

The reels are made up of lower value Greek letter symbols, as well as laurel wreaths, helmets, coin and axes and trio of higher paying character symbols. The bearded Greek god tops the payouts, awarding 3 x your total stake if you land 6 in combination.

You can play Maze Escape Megaways on smartphone as well as on tablet and desktop devices. Despite all the moving parts in the game grid, it still works very nicely when you’re using a small screen.

In the Maze Escape Megaways slot, the gameplay is very unusual and certainly takes a bit of getting used to. That starts with the unorthodox game engine and continues with the other modifiers that can trigger off the back of them. There’s also a free games bonus with more potential modifiers.

In the middle position on the leftmost reel, you’ll see that 1 position is highlighted. If the symbol that appears in this position makes up part of a winning combination, it becomes the Path symbol and the Shifting Maze Avalanche feature is activated.

All Blocker and Minotaur symbols are locked, the matching Path symbols are moved to the central position on their reel and the remaining symbols are removed. All the reels then shift 1 position to the left. The symbols on reel 1 dropping off the screen and new symbols and blockers appearing in reel 6.

On each shift, 2 random blockers are removed. A new payout calculation is then made. If a new winner is formed, the process is repeated. These continue until there’s an avalanche with no new winning combination on display. You can trigger a couple of modifiers during this feature too. To activate them, open the Athena or Minotaur blockers.

When Guidance of Athena feature triggers randomly, between 1 and 4 Path symbols are added to empty positions on the grid, boosting your chances of creating a new winning combination. 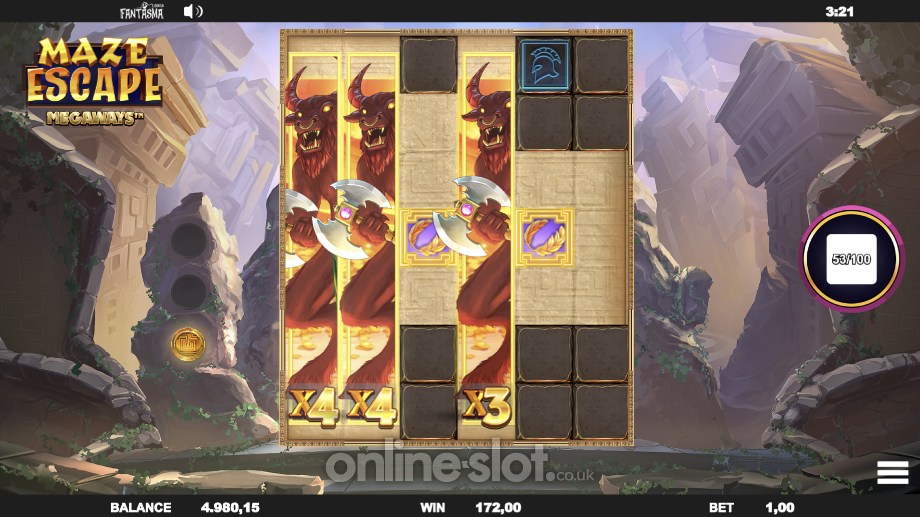 When the Minotaur is unblocked, the Minotaur Wild feature is activated. The Minotaur fills the whole of that reel, turning it wild in the process. This stacked symbol also comes with a multiplier attached which can be anything up to 7x. Like other unblocked symbols, it shifts 1 reel to the left with each Avalanche during the round.

If you’re lucky enough to land more than 1, Minotaur wild in the same winning combination, the multiplier values are combined to give an even bigger payout boost. 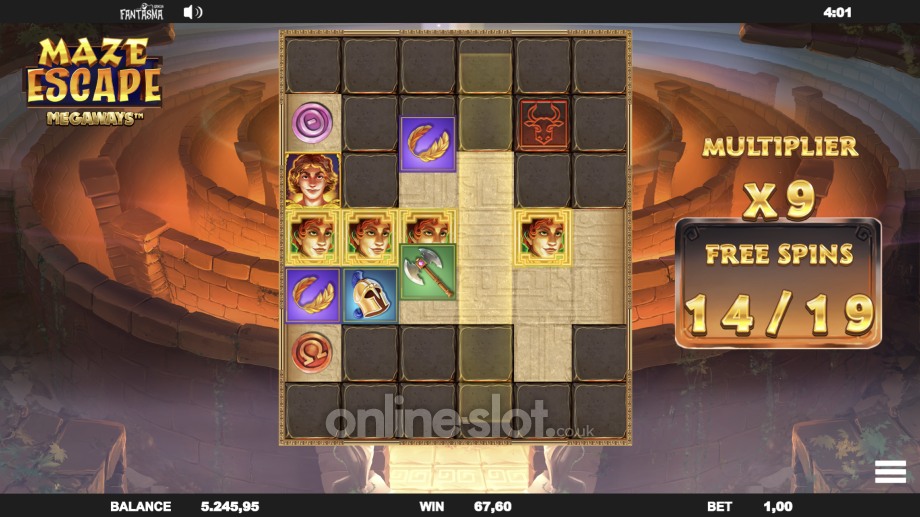 Land 3 Bonus symbols on the same spin and you can look forward to 10 free spins in the Labyrinth Free Spins feature. Here, the Shifting Maze Avalanche triggers following every winning free spin, not just on those winners that include the highlighted symbol position.

Blocker symbols can appear on reels 3 through 6 during the free spins. When these are unblocked, they can add another 1, 2 or 3 free spins to your total or they can award a 1x, 2x or 3x multiplier boost.

Fantasma Games has taken elements of the classic Megaways format and given them a shake to create something fresh and innovative.

The gameplay here is certainly unusual and we really recommend having a spin in demo mode if you get the opportunity until you get accustomed to the shifting reels, blockers and avalanches. It’s not your garden Megaways title by any means but the Maze Escape Megaways slot is better for it.

The features stack up pretty well. Especially if you open up the Athena or Minotaur modifiers when the Shifting Maze Avalanches are up and running. The Labyrinth Free Spins feature is the key to big wins thanks to the Avalanches activating with every winning spin.

The unusual mechanic probably won’t be to all tastes. If you like the ancient myth and legend theme, Maze Escape Megaways offers a fresh look at an old school genre. If you like Megaways slot games but want something different, this is it.

Finally, you should also try the Heroes Hunt Megaways slot (by Fantasma Games) which has a high RTP of 96.65%, max wins of 26,000 x stake per spin and lots of bonus features.

What is the Maze Escape Megaways RTP?

The Maze Escape Megaways return to player rate is 96.15% which is about average. The volatility is high though with most of the bigger wins coming from the bonus features.

What is the Maze Escape Megaways max win?

The most you can win from a single spin is 25,000 x your total stake. To win big, you need multipliers which can arrive in the base game or free spins.

Is there a Maze Escape Megaways free spins feature?

Yes, landing 3 Bonus symbols will trigger the Labyrinth Free Spins feature with 10 free spins. Look out here for plenty of avalanches as well as extra free spins and multipliers when you unblock certain symbols positions.

What is the Shifting Maze Avalanche feature?

The Shifting Maze Avalanche feature is a twist on classic avalanche reels. Land a winning that includes a symbol in the highlighted position to activate this round. Reels move 1 step to the left after each avalanche. You can also bring stacked wilds with multipliers of up to 7x into play here.