Historical fantasy adventure is the theme on offer in the Heroes Hunt Megaways slot. Created by Fantasma Games, it’s played using a 6x6 grid where the number of Megaways can reach up 46,656. As you’ll find out in this Heroes Hunt Megaways review, there’s plenty going on here, starting with the avalanche reels.

Each of the wizard, warrior and archer has a special power which can deliver exploding symbols, expanding wilds with multipliers and respins. There are also 2 free spins rounds. It’s all a little complicated but the high variance gameplay means that Heroes Hunt Megaways can really pack a punch.

You’ll find plenty of extras in Heroes Hunt Megaways. This is about as far removed from a classic fruit machine as you’ll get. Those extras include avalanche reels, a trio of characters symbols that deliver modifiers plus a pair of free spin features. Let’s have a closer look.

Land a winner and the successful symbols are removed and new ones replace them. The Avalanche Reels feature comes into play and avalanches continue until no new winning combination is formed. 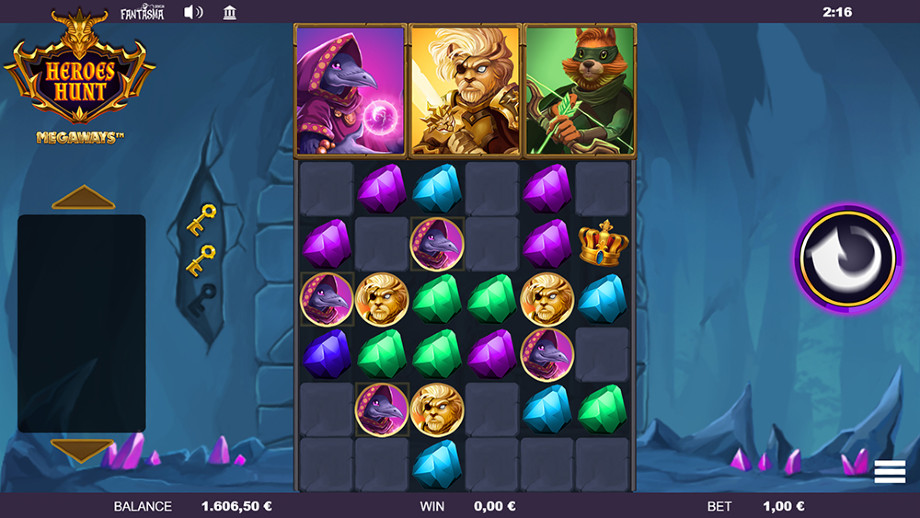 When opening up Heroes Hunt Megaways, you’ll have the pick of 3 heroes – the Wizard, the Warrior or the Archer. This symbol will be unlocked. Each hero comes with a special extra. You can unlock the other Heroes too. More on that shortly.

If the Wizard is unlocked, you could see Explosion symbols appear on reels 2 through 5. This causes an explosion which clears a 2×2 or 3×3 block on the reels and potentially opens up blocked positions. A new avalanche then follows.

If the Warrior is unlocked, it’s expanding wild symbols that can appear on reels 2 through 5. These fill the whole of the reels whenever they hit, including blocked positions. These come with a random multiplier of between 1x and 6x attached. Land more than 1 expanding wild on the same spin and the multipliers are multiplied by each other. For example, a winning combination that included 2x and 4x wild multipliers would be boosted by 8x.

If the Archer is unlocked, look out for arrow symbols on reels 2 through 5 which trigger a respin. Each respin symbol plus between 6 and 12 random symbol positions are cleared and a new avalanche takes place.

As well as awarding Experience Points, the treasure chest on reel 6 can also trigger the Mimic Free Spins feature. You’ll then play 10 free spins with all 3 Heroes unlocked. Look out too for special Mimic Wild symbols that can appear on the middle 4 reels. 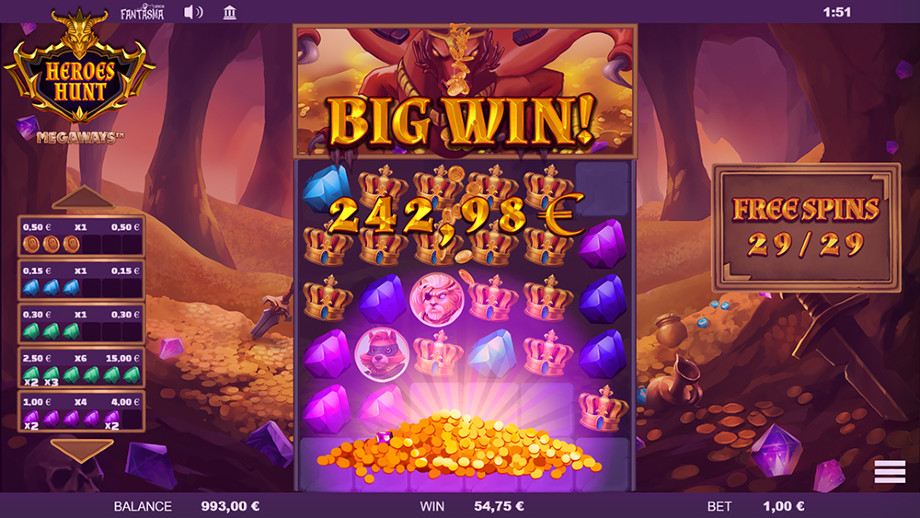 When all 3 Heroes are unlocked, golden key symbols are added to the reels. Land 3 of these keys on a single spin or within a single set of avalanches to trigger the Dragon Free Spins feature with 10 free spins.

Heroes Hunt Megaways is played on a 6×6 grid – winning combinations are created by landing matching symbols on adjacent reels. You’ll notice that some symbol positions (4 on each reel) are blocked to begin with. This has an impact on the number of active Megaways which can range from between 64 right up to 46,656.

You can play from between 20p and £40 per spin which makes it available for players with all bankrolls. The RTP in Heroes Hunt Megaways varies slightly depending on which round you’re playing in. It rounds up overall to a non-too shabby 96.65% which compares quite favourably to many other releases.

If you like volatile slots you won’t be disappointed either. The Heroes Hunt Megaways variance is high. The maximum win is 26,000 x your stake too which is very high.

Autoplay is possible too. You can set between 5 and 100 spins and adjust your win and loss limits accordingly. Just click on the arrows above the spin button to do this. You can also use the spacebar to spin. The classy visuals in the desktop version are present and correct in Heroes Hunt Megaways mobile. It looks and sounds excellent. It plays perfectly well too.

You won’t find many better looking and sounding slots than Heroes Hunt Megaways. The design here is high class and very impressive. With a crystal-filled cave in the background, you’ll see 4 lower value gemstones alongside a coin, crown and the trio of animal heroes.

The Archer is a bear, the Wizard a crow and the Warrior, well it’s hard to tell! The most rewarding symbol is the red dragon. This pays 20 x your total stake if you land 6 in combination.

The imagery is super sharp and packed full of detail. The animations are silky smooth too. There’s a bouncy orchestral backing track to accompany the action too. It could come from a movie soundtrack and fits the fantasy theme very nicely.

The game interface is simple to use. Click on the + button to adjust bet size. The three lines take you to the paytable and other settings. It’s all very easy and intuitive. Heroes Hunt Megaways is truly a superb designed slot.

Fantasma Games has taken the popular Megaways mechanic and really shaken it up in Heroes Hunt Megaways. The gameplay here is rather complicated. A simple fruity it ain’t. If you get the chance, play in demo mode (above) for a while just to get used to the unusual features.

If you like volatile slots that are packed full of variety and back story, that’s just what’s on offer here – you can win up to 26,000 x your stake on each spin/free spin which is impressive.

❓ What is the Heroes Hunt Megaways RTP?

The RTP in Heroes Hunt Megaways is 96.65%. That stacks up pretty well and is better than what you’ll find in many other slots.

🥇 What is the Heroes Hunt Megaways max payout?

You can win up to 26,000 x your stake on each spin or free spin in the Heroes Hunt Megaways slot – this is the highest payout of any of Fantasma Games’ Megaways slots.

You’ll find the same high-class sound and visuals, silky smooth animations and huge raft of extras in the mobile version of Heroes Hunt Megaways. You won’t lose anything playing on a handheld device.

⚡ Can I play Heroes Hunt Megaways for free?

Yes – a demo version of Heroes Hunt Megaways is available here at Online-Slot.co.uk. You can play the unique slot on desktop, mobile or tablet devices as desired.