Based on the ancient waterway that formed the boundary between the Earth and the underworld in ancient Greek mythology, the Hades: River of Souls slot is a 5 reel, 10 payline win both ways game from Fantasma Games. Avalanche wins can bring special symbols into play, including wilds that are collected in a meter. Fill the meter to increase a multiplier. Look out too for the Skull of Charon which removes up to 10 symbols to create a new avalanche. Trigger the Hades Free Spins feature and you’ll get free spins complete with an expanding multiplier. Let’s take a look in our detailed Hades: River of Souls review.

Where to Play Hades: River of Souls Slot

The Hades: River of Souls slot has 5 reels, 3 rows and 10 paylines. It uses a Win Both Ways engine meaning that winning combinations can start from reel 5 as well as the more usual reel 1. A win is created by getting matching symbols across successive reels beginning from either of the outer reels.

There’s plenty of variety available when it comes to bet levels. Stakes start at 20p per spin, rising to a maximum of £100 per spin. You can set, 10, 25, 50 or 100 autoplay spins, complete with win and loss limits as required.

The Hades: River of Souls RTP is an impressive 96.56% which stacks up favourable when compared to most other slot releases. The hit frequency is 19.49% meaning nearly 1 in 5 spins will result in a winning combination.

We found this ancient adventure to be a volatile one too. We’d put the variance in the high range and 9/10. When it comes to win potential, you can win up to 5,058.4 x your total stake.

The gameplay in is a little unusual in the Hades: River of Souls slot, starting with the game set up. You’ll find Avalanche reels, wild multiplier meters and a free spins round. Let’s have a closer look.

When a winning combination is formed, the winning symbols are removed from play and new symbols drop down and replace them So far, so standard.

Above the main set of reels, you’ll see another set that is made up of blanks as well as wilds, scatters and Skull of Charon symbols. These symbols drop down following an Avalanche and only then become active.

The base game action starts with payouts at the standard 1x. Each time a wild symbol is removed from play via an Avalanche, it’s collected in the meter to the left of the reels. When all 3 positions on the meter are illuminated, the multiplier value increases by 1x. Following a winless Avalanche, the wild multiplier meter drops back to 1x.

The Skull of Charon feature triggers whenever the bright green Skull of Charon symbol lands. After an unsuccessful Avalanche, the Skull, plus between 2 and 10 standard symbols are removed and a new Avalanche takes place. 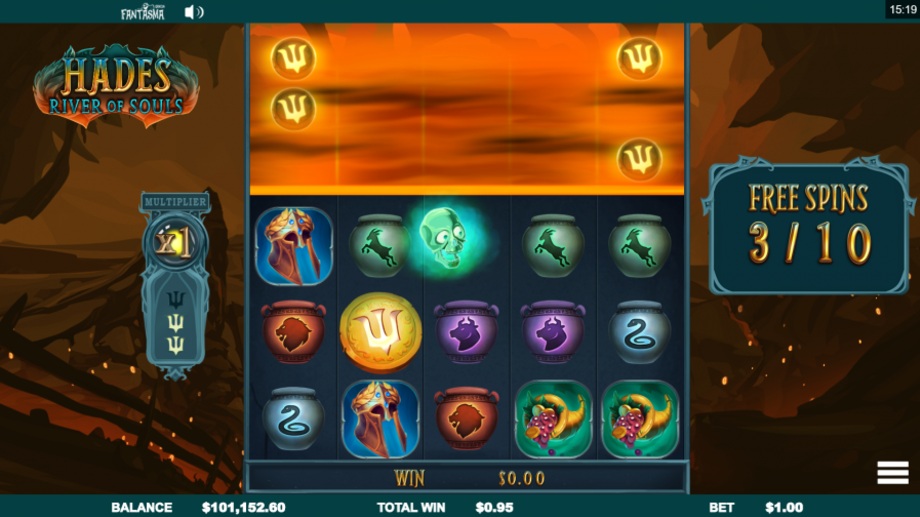 Land 3, 4 or 5 bonus symbols on the same spin and your reward is 10, 15 or 20 free spins. Once again, collecting 3 wilds in the multiplier meter increases the multiplier by 2x.

Unlike in the base game, the multiplier doesn’t revert to its original 1x state following a winless Avalanche. It remains the same or increases for the remainder of the round. Retriggers are possible too. Hit 3, 4 or 5 bonus symbols for another round of 10, 15 or 20 free spins. 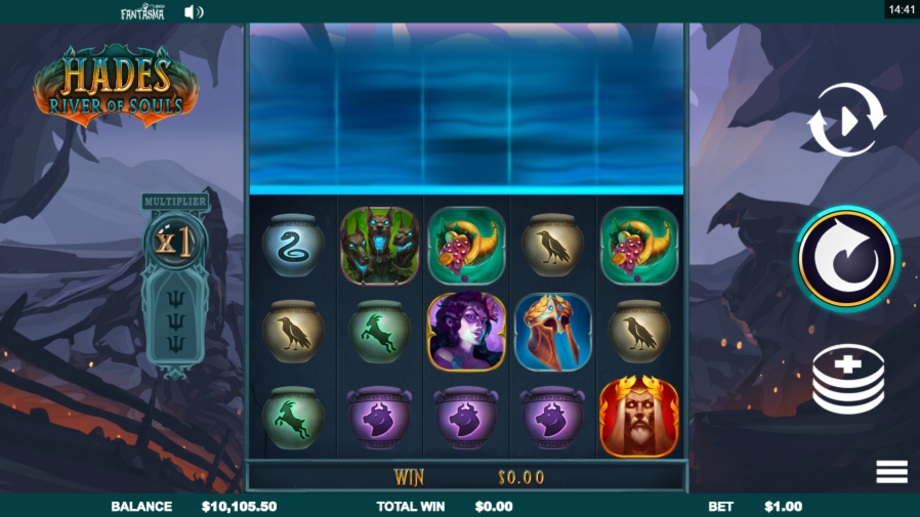 The Hades: River of Souls slot has a Greek mythology theme and takes you to the ancient waterway between Earth and the Greek underworld. Classily designed, there’s rather menacing soundtrack playing while you spin which fits the underworld theme perfectly and gives the game plenty of atmosphere.

The visuals stack up well too. On the reels, you’ll see 5 lower value pot symbols that are embellished with animal motifs. They’re joined by a cornucopia, a warrior’s helmet, the three-headed dog Cerberus and a Greek Goddess. The bearded figure of Hades, god of the Underworld is most rewarding symbol.

Land 5 on a payline for an award equal to 10x your total stake. The wild replaces all the standard symbols and also offers rewards of up to 10 x stake for a 5 on a payline combo.

The colourful visuals here are terrific and the backing track gives the game a properly creepy fill, especially when you add the screams and squeals when the Skull of Charon appears.

The Hades: River of Souls mobile slot works very nicely. You’ll probably want decent speakers to get the full orchestral effect but the polished imagery and volatile gameplay make this mobile slot a very playable one.

Greek mythology has been the inspiration for many an online slot. There aren’t many that look and sound like Hades: River of Souls though. The design is very impressive.

The range of extras here isn’t massive. There’s more than enough going on to keep things interesting though. The dropping symbols can be a little frustrating at times but a decent run of Avalanches can get things moving. The bigger wins will come in the Hades Free Spins feature as the multiplier can only increase.

We found the variance here to be high though, so be warned. If you’re looking for a slot that combines plenty of atmosphere with some volatile gameplay, you’ll find both in the Hades: River of Souls slot. Another option is Playtech’s Age of the Gods which features Hades, has 4 free spins feature and 4 progressive jackpots.

What is the Hades: River of Souls RTP?

The Hades: River of Souls Return to Player rate is a very solid 96.56%. There are plenty of slots that break the 96% mark but not too many that are higher than 96.5%. It’s high variance though so tread carefully.

What is the Hades: River of Souls max payout?

The Hades: River of Souls slot offers maximum wins of 5,058.4 x your total stake. You’re more likely to win big amounts in the Hades Free Spins feature due to the multiplier only increasing.

Where can I play the Hades: River of Souls slot game?

Is there a Hades: River of Sous mobile slot?

Yes, Hades River of Souls is available to play on all devices. You’ll find the same blend of volatile gameplay and atmospheric sound and visuals whether you’re playing on a desktop, tablet or mobile device.