Head back to a post-apocalyptic world in the Nitropolis 2 slot. Powered by ELK Studios, it’s the follow-up to Nitropolis. Played on 6 reels, it begins with 4,096 ways to win. Nitro Reels increase the number of symbols per reel to 24 for over 191 million ways to win. With respins, there are 8 Nitro Booster features which give you various extras like win both ways wins, added wilds and more ways to win. These all apply in the free spins too. With 10,000 x stake wins, find out more in the exhilarating Nitropolis 2 review.

Where to Play Nitropolis 2 Slot

The Nitropolis 2 slot starts off with 6 reels, 4 rows and 4,096 ways to win. Winning combinations are formed by landing 3 or more matching symbols from left to right on adjacent reels and beginning from reel 1.

The stakes are standard for an ELK Studios slot game as you can spin away from 20p to £100 per spin. There’s an Auto Spin function where 10, 25, 50 or 100 auto spins can be selected. There’s also a Quick Play mode which allows for faster spins. Both these extras won’t be available in the UK from the end of October 2021.

The Nitropolis 2 RTP is 95% which is below the 96% average (the original Nitropolis slot has a 96% RTP rate). Expect a win every 5 spins on average as the hit frequency rate is 20%. Highly volatile, you can win up to 10,000 x your total stake per spin.

The Nitropolis 2 slot is the sequel to Nitropolis which was released by ELK Studios in November 2020. Set in a post-apocalyptic world, it feels like the 1982 Blade Runner film which is set in a dystopian future. It has a comic book feel to it.

With similar visuals to the original game, you’ll see futuristic high-rise buildings in the backdrop. You will notice the unique and rather hypnotising soundtrack which add to the chaos it can cause. There are 3 animal clans in the sequel as opposed to 3 in the original version: the Dirty Dawgs, the Gritty Kitties and Pug Thugs.

Symbols on the reels include A, K, Q and J royals. Then you have Pug Thugs, Gritty Kitty and Dirty Dawgs Wanted posters. There’s also a Pest Control symbol. The higher value symbols include the Pug, Kitty and Dawg boss. The top paying symbol is the Pest Sergeant that pays 0.7, 0.8, 0.9 or 1 x stake for 3, 4, 5 or 6 in combination.

The no dog fouling sign is the wild symbol. This substitutes for any symbol except the bonus symbol. The wild pays like the Pest Sergeant (up to 1 x stake for 6 in combination).

Nitropolis 2 is made using HTML5 technology meaning it can be played on mobile, tablet and desktop devices. With the potential for over 191 million ways to win, it’s best played on a laptop or PC for optimum visual effect.

Nitropolis 2 comes with a total of 12 bonus features. With Nitro Reels which increase the number of ways to win as respins, there are 8 Nitro Booster features which give you various extras including win both ways payouts. These all apply in the free spins. 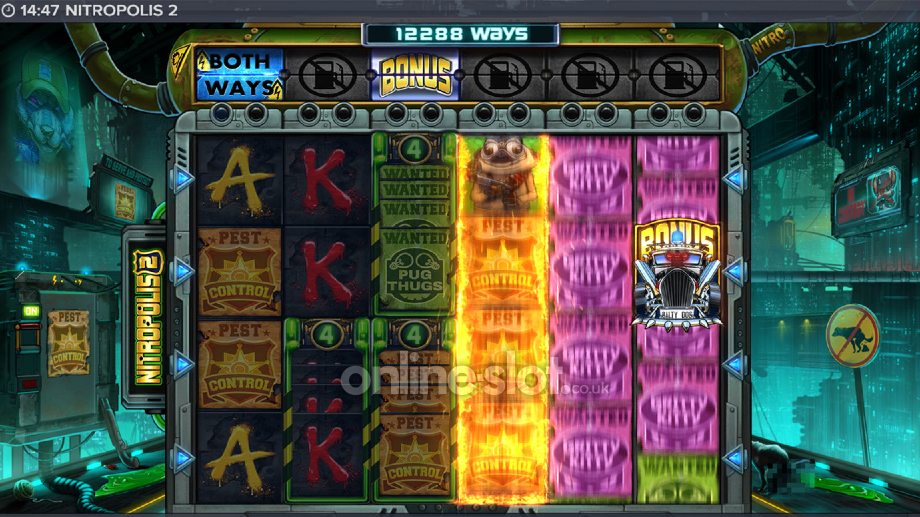 This can lead to a lot more symbols appearing on each reel. There’s a box above the reels which highlights how many ways to win you are playing with. Each reel can contain 24 symbols each meaning there’s 191,102,976 ways to win. You read that right, that’s over 191 million ways to win. 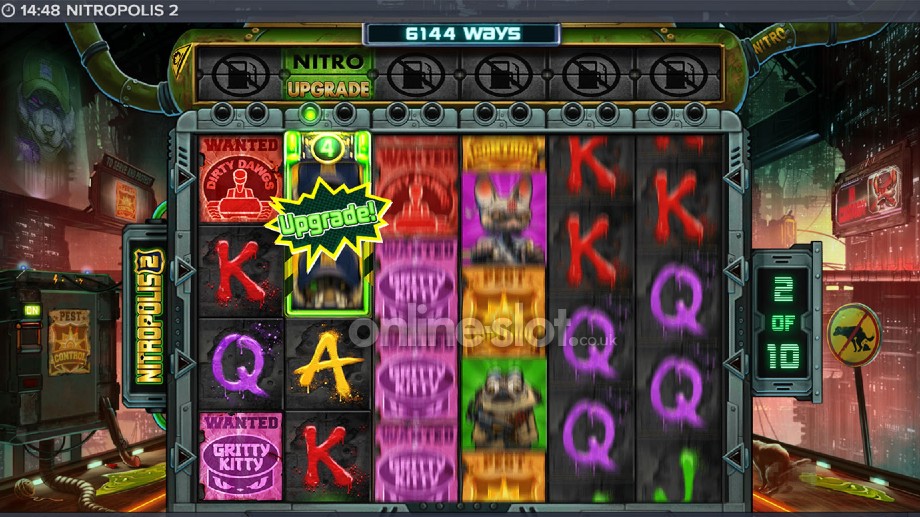 Unlike the original game, Nitropolis 2 comes with 8 Nitro Booster features. You will notice a feature reel above the reels. 8 different feature symbols can land and impact the reels below them. Here’s what to expect: 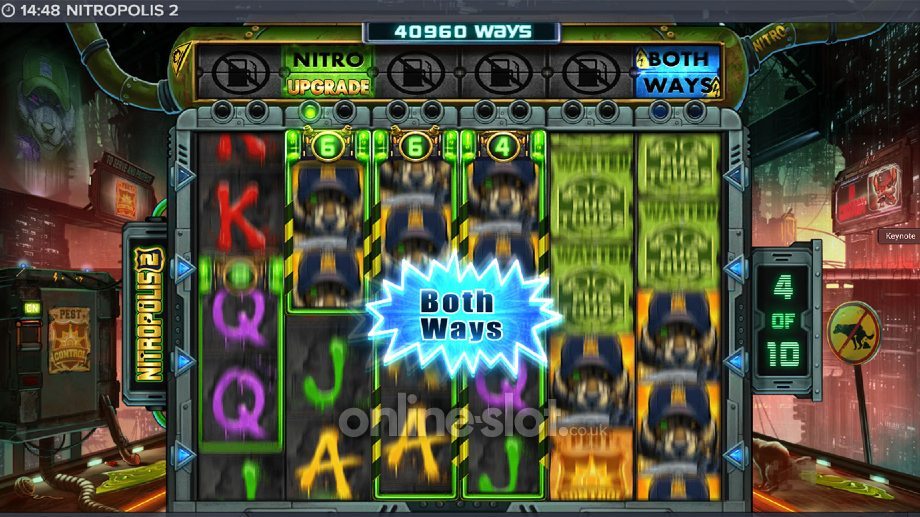 Once in, all Nitro Reels lock in position for the duration of the feature. This means you could play every free spin with over 13 million ways to win. The Nitro Upgrade extra can land in the Nitro Booster to increase the number of symbols on the Nitro Reels for more ways to win.

All Nitro Booster features can land in the free spins to give you Both Ways wins, wilds and only high value symbols. Lastly, you can land bonus symbols in the Nitro Booster and the main reels meaning you can win additional free spins.

In some countries, there’s an X-iter feature. You can choose from 5 different game modes. Here’s what they offer:

The Nitropolis 2 slot is very similar to the original game in terms of looks and bonus features. The addition of the Nitro Booster features is a welcome one and can add plenty of variety to your experience. The San Quentin slot by Nolimit City also have a top row displaying symbols for added extras.

In my opinion, the soundtrack has been improved but could see players reaching for the mute button. With so many moving parts and the Nitro Reels, the excitement can be high due to the potential number of ways to win. Saying that, the max win of 10,000 x stake is exactly like the original which I thought ELK Studios would have increased. This is the only downfall considering there’s over 191 million ways to win as opposed to over 85 million in the original.

If you want a similar chaotic yet exciting experience, the Punk Rocker slot (from Nolimit City) delivers this as well as potential payouts of 15,072 x stake per spin.

What is the Nitropolis 2 RTP?

The Nitropolis 2 RTP rate is 95% which is below the 96% slots average. With wins every 5 spins on average, the variance is high.

What is the Nitropolis 2 max win?

The most you can win per spin is 10,000 x your total stake. The win big, you need to Nitro Reels to work their magic to give you over 191 million ways to win.

What are Nitro Reels?

The Nitro Reels feature is triggered randomly. Nitro Reels occupy 2 spaces and can display up to 12 symbols. This can lead to 24 symbols per reel which will give you 191,102,976 ways to win.

What are the Nitro Booster features?

The Nitro Booster features come into play with a feature symbol appears above the reels. There 8 different features to benefit from including both ways wins, respins, high value symbols, extra wilds and added symbols.

Are there any Nitropolis 2 free spins?

Yes, the Bonus Game feature begins with up to 25 free spins. With more to be won, all Nitro Reels lock in place for the free spins. Nitro Boosters also appear to give you various extras and more ways to win.