Classic fruit machine imagery combines with some fresh and innovative gameplay in the unusual Bompers slot. Created by ELK Studios, the action starts on a 6 reel, 4,096 ways to win machine but successive symbol drop wins can bring new rows into play and give you up to 262,144 ways to win. Look out for Bompers symbols which can appear before a spin. Any symbol that drops onto 1 of these sticky Bompers is collected in a meter. Fill the meter and the Bompers turn into sticky wilds. Mystery Bombs can explode to create new avalanches with Shooting Stars rising to the top of the grid and generate up to 7 new symbols. There’s also a Free Dops Bonus feature that awards 7 free spins with Bompers sticky throughout. Discover all you’ll need to know in our full Bompers review.

The Bompers slot is an Avalanche Reels game. With 6 reels and 4,096 ways to win, create a winning combination by landing 3 or more matching symbols or wilds on adjoining reels, starting from reel 1.

The winning standard symbols are removed from the reels and the remaining symbols drop then slide left or right into new positions. The avalanches continue until there’s one where no new winner is formed.

Stakes in Bompers range from 20p to £100 per spin. Click on the coins in the bottom left-hand corner of the screen then choose your bet level. You can also show the bet level in coins. With an Autoplay function, you can play with or without game sounds and music.

The Bompers RTP is 95.8% which is below the usual 96.1% average for ELK Studios slots. Expect a win every fifth spin on average as the hit frequency rate is 19.9%. 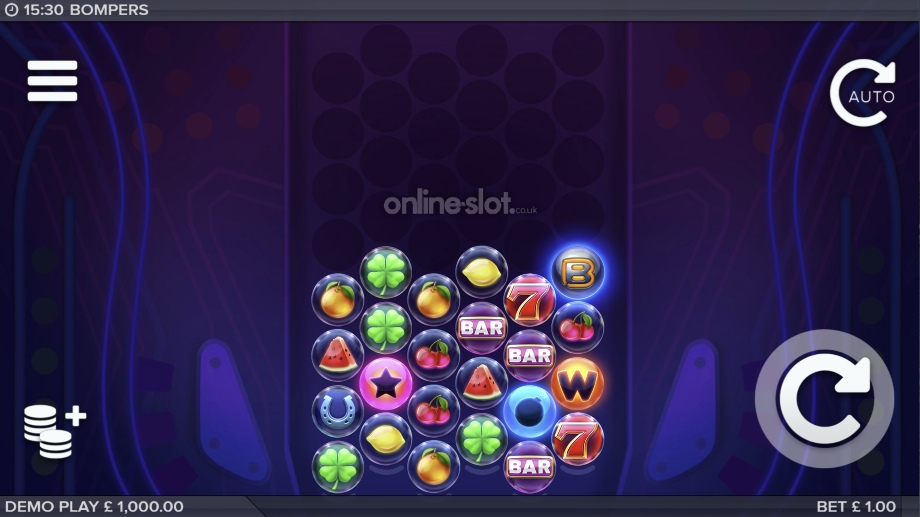 The Bompers slot has a pinball machine theme. There’s a shiny, glossy feel to the visuals here which are bright, colourful and very sharp. It’s very easy on the eye.

It has a high energy disco soundtrack which I found rather intrusive and annoying. You do have the option to play with just the game effects active worked just fine.

The symbol positions are circle shaped. You’ll find a collection of classic fruity symbols here including cherries, lemons, oranges and slices of watermelons. Then you have 4 leaf clovers, horseshoes BARs and lucky 7s. The lucky 7 is the most rewarding symbol. Land 3, 4, 5 or 6 of these in combination for an award of 2, 4, 6 or 20 x your total stake.

There are also Wild, Bomper, Shooting Star and Bomb symbols. These can trigger a variety of extras which I’ll look at in the Bonus feature section below. Here’s a table highlighting payouts/functions for each symbol:

Bompers has been optimised for play on smartphones and tablets as well as desktop machines. The bold visuals stand out nicely, even if you’re playing on a smaller screen. The game engine means there are plenty of moving parts here. I preferred the bigger screen versions but the Bompers mobile slot is also very playable.

The design in Bompers might have a familiar, fruity feel but the gameplay is rather unusual. Played using avalanche reels, successive wins expand the potential ways to win. Collect Bompers which can turn into sticky wilds and look out for Bombs and Shooting Stars which can deliver even more action. There’s also a free spins feature.

The Avalanche feature means that the number of rows in play can change depending on the symbol configuration. The more rows, the bigger the number of ways to win. If you play with 8 rows, you can benefit from up to 262,144 ways to win:

Following an avalanche where no new winning combination is created, the reels reset to their original 4 row, 4,096 ways to win state.

To help you form wins, Bomper symbols can appear. Bompers are special sticky W symbols. You can see up to 5 of them at the start of any spin. If an avalanche takes place and a standard symbol falls onto a Bomper, it’s collected in a meter. Once a meter if filled, that Bomper symbol turns into a sticky wild for any avalanches that follow.

The Bompers symbol is a spreading wild. When she appears she triggers the Bompers feature and awards respins. As the respins play out, the wild walks 1 reel to the left until they drop off the reels. 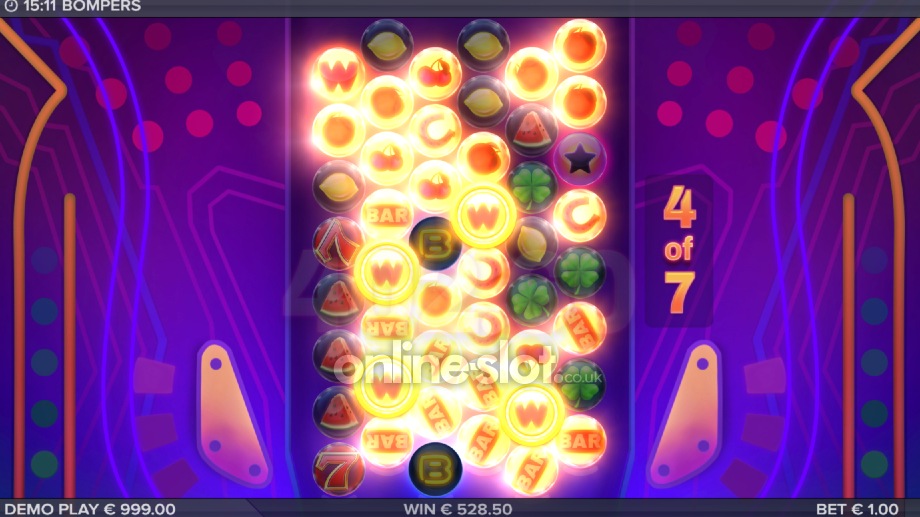 Land 3 Bonus symbols on the same spin and you’ll trigger the Free Drops Bonus feature. Your reward is 7 free spins/drops. You will also begin with up to 5 Bompers.

When the meter is full, Bompers will turn into sticky wilds during the free spins will remain locked in position for the whole of the feature.

The Bompers slot fuses fruit machine imagery with a modern avalanche reels game mechanic to very playable effect. It has elements of the Cygnus slot (by ELK Studios) as the symbols roll to the left or right.

The first thing that will strike you is the music which you’ll either love or hate. Visually, it’s rather understated so the soundtrack compensates for that fact.

The Bombs, Shooting Stars and Bompers add extra layers to the familiar avalanche reels format and add to the spectacle. It’s much more fun that other similar slots from ELK Studios and will appeal to arcade players in particular. The key to big wins is from the sticky wilds in the free spins.

If you like avalanche slots, the fruity-inspired Bompers offers something a little different. However, it’s still not as good as Nitropolis which offers over 85 million ways to win as well as 10,000 x stake wins on each spin.

What is the Bompers RTP?

The Bompers RTP rate is 95.8% which is a little lower than the 96.1% average set by ELK Studios. The variance is medium to high with the bigger wins coming from the features.

What is the Bompers max win?

The maximum win here is 5,000 x your total stake from a single spin. The key to big wins is by increasing the number rows to 8 and play with 262,144 ways to win.

Are there any Bompers free spins?

Yes, the Free Drops Bonus feature gives you 7 free spins. If a Bomper turns into a sticky wild during the feature, the wild remains locked in position for the rest of the feature.

Bompers are special symbols that are collected in a meter whenever a standard symbol drops onto 1 of them during an avalanche. Bompers then turn into sticky wilds.