It’s time to step up to the oche and take aim at a bumper payday in the World Darts Championship slot. Created by Blueprint Gaming, it’s a 5 reel, 10 payline branded game that features many of the game’s biggest stars including Michael Van Gerwen, Peter ‘Snakebite’ Wright and recently crowned World Champ, Gerwyn Price. Landing any combination made up of 3 or more dart player symbols on a payline leads to the creation of a winning combination. There’s also a Free Spins feature. Each time a dartboard scatter lands, you’ll win the prize that’s attached to each dart player symbol. Find out more in our full World Darts Championship review.

The set up in the World Darts Championship slot is very simple. The action takes place on 5 reels, 3 rows and 10 fixed paylines. To create a winner, land 2 or more matching symbols on a payline from left to right, starting from reel 1. For the higher value dart player symbols, any combination of 3 or more will lead to a winner. For example, say you landed James Wade on reel 1, Rob Cross on reel 2 and Dave Chisnall on reel 3, you’d still land a winner.

You can take to the oche here at stake levels that range from between 10p and £500 per spin. Just click in the Bet bubble to the left of the reels and pick from the stakes shown. Alternatively, move the arrows up and down until you find the level you’re after. Below the spin button is the autoplay tab. Click here and you can run up to 100 autospins. There are also options to set win and loss limits.

The World Darts Championship RTP is 96.12% which is just above average. The volatility is in the medium range. With big wins available throughout, the max win is 2,000 x your total stake per spin. 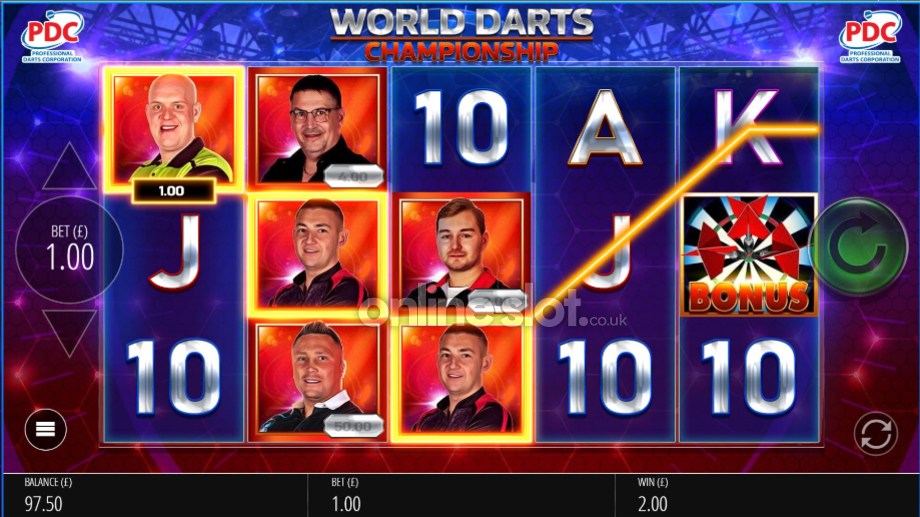 The design in the World Darts Championship slot is simple but rather good. With the bright lights of the Alexandra Palace stage in the background, this is an official branded slot for the Professional Darts Corporation.

While the reels spin, you’ll hear the PDC darts anthem (Chase the Sun by Planet Funk) blasting away in the background. You’ll find yourself ‘oi, oi, oi-ing’ before you know it! The overall effect is very impressive.

On the reels you’ll see tungsten-style A to 10 royals symbols alongside darts, the Championship trophy and a set of flights. The most rewarding symbol is the World Darts Championship logo which awards 0.5, 5, 25 or 200 x your total stake if you land 2, 3, 4 or 5 on a payline.

Each dart player comes with a cash value attached worth between 2 and 50 x your total stake. These come into play when you trigger the feature round which we’ll look at below. The dartboard is the wild. There’s also a bullseye scatter.

You can try and land a maximum while playing on computer, tablet or smartphone. The simple gameplay and bold design and perfectly suited to mobile play. The World Darts Championship mobile slot is a very playable one.

With just 1 bonus feature in World Darts Championship, it’s all about the Free Spins feature. Dart board symbols that land during the feature collect special bonus prizes that are attached to each of the dart players. 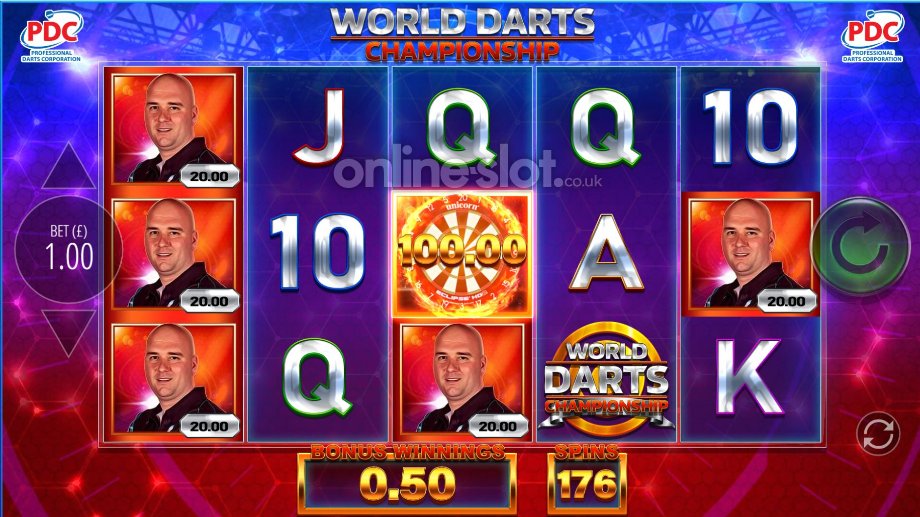 To trigger the Free Spins feature, you’ll need to land 3, 4 or 5 bullseye bonus symbols anywhere on the reels on the same spin. You’ll play 10, 15 or 180 free spins. Before the feature starts, you’ll have a decision to make:

Look out for the wild dartboard symbol during the free spins. Each time 1 of these hits, you’ll have the opportunity to collect some bonus prizes. The cash values attached to all the dart players on show on that free spin are awarded. For example, land a dartboard alongside Gary Anderson who is worth 4 x stake and Michael Smith who is worth 3 x stake and you’d collect an instant win equal to 7 x stake. It doesn’t matter where on the reels the dart players are either.

Given the game’s huge popularity, I’m amazed it’s taken this long for someone to create a fully branded darts themed game. Blueprint Gaming has done a top job with the World Darts Championship slot. The visuals are terrific and the soundtrack really conjures up the atmosphere associated with a night at the arrows.

The range of extras isn’t massive but the free spins is a good one. Opt for the Mystery Free Spins game and land one of the higher value dart players and you can land some big rewards if the dartboards fall nicely. For fans of the game, World Darts Championship hits the bullseye.

If you like branded slots, there are plenty of choices. The Street Fighter 2 slot by NetEnt is very good as to is Monopoly Megaways by Big Time Gaming.

What is the World Darts Championship RTP?

The World Darts Championship return to player rate is 96.12% which is higher than the 96% average. The variance is in the middle with the bigger wins coming from the free spins.

What is the World Darts Championship max win?

The most you can win is 2,000 x your total stake. This is won by filing the reels with the highest value symbol, the World Darts Championship logo.

Yes, the game has been produced in co-operation with the Professional Darts Corporation and features darts players such as James Wade, Michael Van Gerwen and Gary Anderson.

Are there any World Darts Championship free spins?

Yes, the Free Spins feature gives you up to 180 free spins. You then have a choice. In the standard round, all 10 dart player symbols can land. In the Mystery Spins, only one of them can. This is the riskier option.