A film about a potty-mouthed teddy bear proved an unlikely smash hit with movie goers back in 2012. So much so that it prompted Blueprint Gaming to release a slot version. We are of course, talking about the Ted slot. This game is played using 5 reels and 20 paylines. As you’d expect, it is as rude, crude and funny as the original film. If you like slots that are packed full of features, you won’t be disappointed either. There are 11 bonus features in total courtesy of 6 random modifiers and 5 triggered bonus features. Find out all you’ll need to know in our full Ted review.

Where to Play Ted Slot

The base game action in the Ted slot plays out on a 5 reel, 3 row, 20 payline machine. Winners are formed in the standard manner by landing 3 or more matching symbols or wilds on a payline from left to right, starting from the leftmost reel.

You can join Ted at stakes of between 20p and £200 per spin. Click on the Bet button to the left of the reels and choose your level. Like all Blueprint Gaming slots, it’s easy to select from all the available stakes.

The Ted RTP is 95.805% which is slightly below the 96% average. The volatility here is in the medium range with wins distributed evenly throughout the various bonus features. The max win is 500 x your total stake per spin. 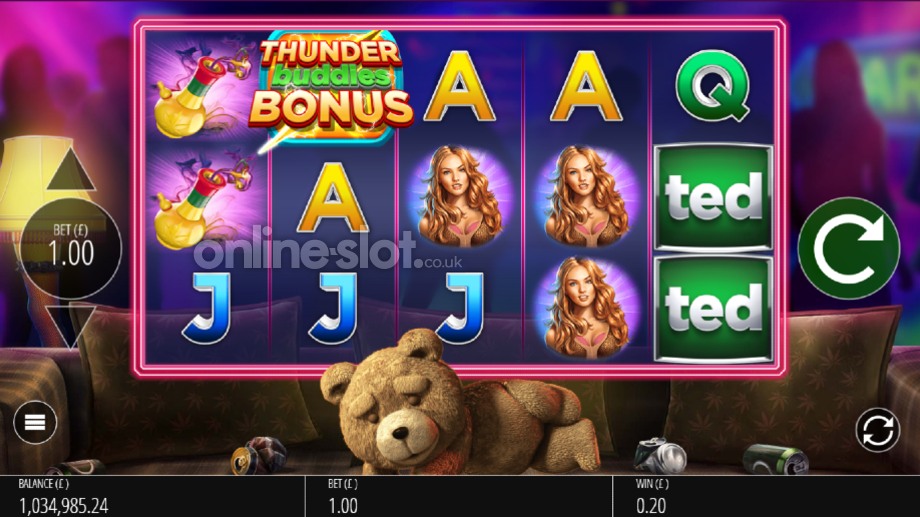 The Ted slot game is based on the Ted film which is an American comedy directed by Seth MacFarlane. The movie stars Mark Wahlberg and Mila Kunis and is based on an 8 year old boy who gets a jumbo teddy bear for Christmas. The teddy bear, Ted, comes to life and becomes his best friend.

The setting is a living room showcasing a sofa covered with discarded beer cars with Ted sleeping off a hangover. There’s a jazzy soundtrack playing while you spin. You’ll also hear some snarky comments from Ted as you go. If you find them a bit too intrusive, just head to the settings and adjust accordingly.

On the reels, you’ll find lower value royal symbols alongside a bong, a swan, a crate of beers and Ted’s other half, Tami-Lynn. The Ted logo is the most lucrative standard symbol. It spins in a fully stacked formation and offers awards of 25 x your total stake if you land 5 on a payline.

Ted himself is the wild symbol. He replaces all the standard symbols when he makes up part of a winning combination. He also pays up to 25 x your total stake per payline.

The game has been fully optimised using HTML5 technology meaning you can play Ted on mobiles, tablets and desktop devices. All versions offer the wide selection of features and simple but easy to follow design.

Games from Blueprint Gaming are often feast or famine when it comes to features. The Ted online slot sits firmly in the former category. There’s a massive range of bonus features (11 to be precise) to get stuck into here including 6 randomly triggered modifiers and 5 triggered bonus features. 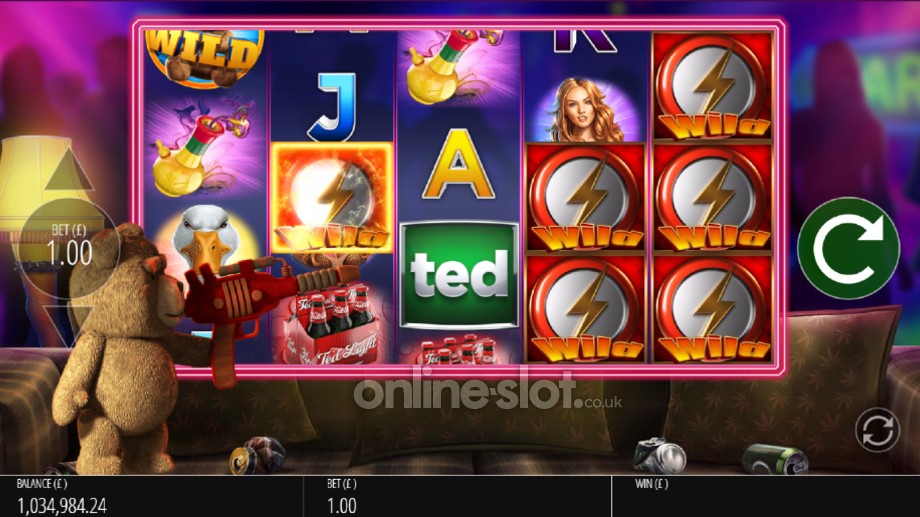 On any spin, you could benefit from 1 of the following randomly triggered Ted modifiers. With 6 of them to play, here’s what to expect: 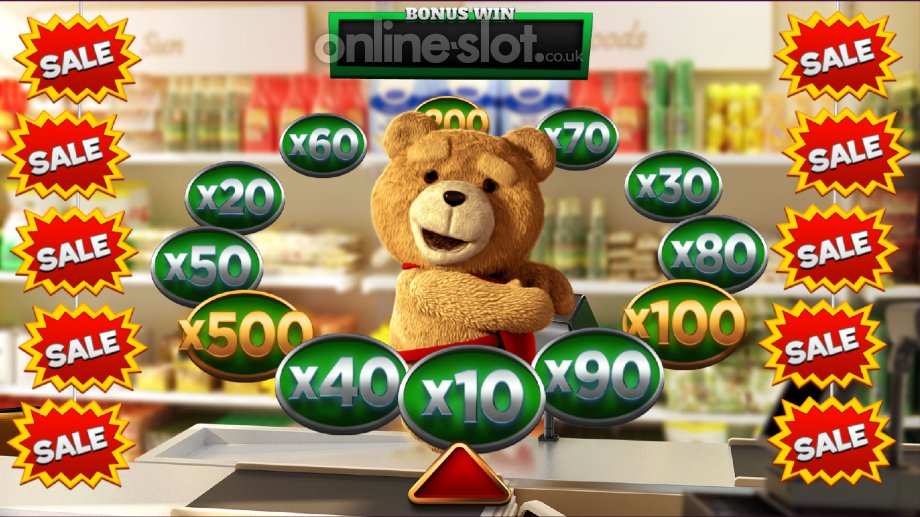 Land 3 or more Thunder Buddies Bonus symbols on the same spin to activate the feature ladder. Depending on where the pointer lands, you’ll win one of the extras below:

If you don’t like the bonus feature awarded, you can take a 50/50 gamble and try to get a better bonus feature. Lose the flip, and you’ll return to the base game without playing a feature. The higher up the ladder you go, the better the potential bonus feature.

This unlikely movie turned slot has proved very popular. So much so that it has spawned a series of spinoffs in the form of Ted Jackpot King, Ted Pub Fruit Slot and Ted Megaways. The original Ted slot game still has its charms.

If you like slots that offer plenty of variety, then you won’t be disappointed with what’s on offer here. The range of extras is massive. The best of the features are the Big Money Bonus and the Ted Free Spins features. The max win is 500 x stake which can be won from a base game spin. That’s the only negative: it needs bigger potential payouts.

The burps, farts and swearing won’t be for everyone but if you’re a fan of Seth McFarlane’s original movie, the Ted slot is well worth considering. Otherwise, this game is purely for entertainment purposes only as the max win lets it down slightly.

Will you be his Thunder Buddy for life? If not, there are plenty of movie slots which offer better potential wins. Jurassic World by Microgaming is my pick. If you like TV series, Vikings by NetEnt is a must.

What is the Ted RTP?

The Ted RTP is 95.805%. The average is 96%. The volatility of this feature-filled slot is medium. This ensures plenty of entertainment and bonus features.

What is the Ted max win?

The maximum win per spin is 500 x your total stake. This can be won by filling the reels with the highest value symbol, wilds or from the Big Money Bonus feature.

Are there any Ted free spins?

Can I play the Ted slot free?