Triggering a gold rush is the name of the game in the Rolling in Gold slot, an explosive mining-themed game from Blueprint Gaming. Boasting superb visuals and a twangy, toe-tapping soundtrack, it’s played using a 6 reel, 2,304 ways to win game engine and comes with a pair of cracking features.  Both the Gold Spins and the Diamonds Spins are variations on the streak respin feature. Hope to land the Diamond Spins feature as they come with multipliers of up to 10x with payouts made after every spin and not just at the end of the round. Find out all you’ll need to know in our deep dive Rolling in Gold review.

Where to Play Rolling in Gold Slot

The set up in the Rolling in Gold slot isn’t one you see in many online slots. The 6 reels appear in a 3x3x4x4x4x4 formation. Together, they offer 2,304 ways to win. To form a winning combination, land 3 or more matching symbols on adjoining reels, starting from reel 1.

The game is available to play at stake levels from 10p to £10 per spin. Just click on the Bet tab to the left of the reels and choose your stake. As usual for a Blueprint Gaming slot, you can set up to 100 autospins here, complete with win and loss stop limits.

The Rolling in Gold RTP is 96.03% which is about average. The volatility is in the medium to high range with the maximum win coming in at 50,000 x your total stake. 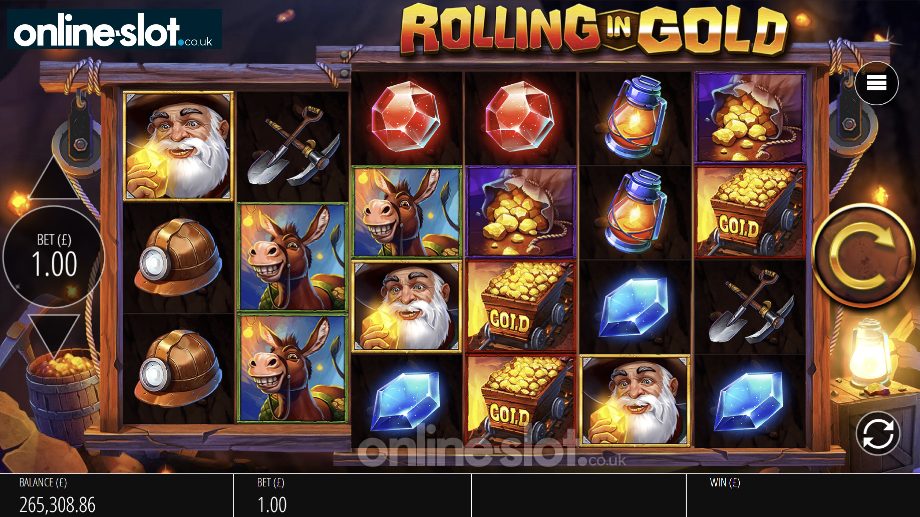 Blueprint Gaming slots are usually and treat for the eyes and ears and Rolling in Gold is another cracker as far as design is concerned. With a mining theme, a mineshaft is the setting here.

The glossy symbols are superbly done and stand out nicely against the dark mine backdrop. The hillbilly soundtrack is a cracker too, full of twanging banjos. That twanging gets even more frenetic when you trigger the feature.

It has real earworm potential too. Even the cries from the miner informing you of a big result aren’t too annoying (even if he does sound like Shaggy from Scooby Doo). This is another fine effort from the Blueprint designers. Design wise, it will remind you of Bonanza Megaways from Big Time Gaming.

On the reels you’ll see blue, orange and red gemstones, a pickaxe, lamp and miner’s helmet, a pit pony and a bag of gold nuggets and a cart full of gold. The bearded prospector is the most rewarding symbol, paying 1, 5, 10 or 15 x your total stake if you land 3, 4, 5 or 6 in combination.

The sticks of dynamite symbol is the wild. This can appear on reels 1 and 2 only and substitute for all the standard symbols.

The Rolling in Gold mobile slots works really well. The visuals are super sharp, even when you’re playing on a small screen. The simple streak respin bonuses are well suited to smartphone play too. It can also be played on desktop and tablet devices.

Respins are the central to most of the best action on offer in this underground adventure. Both the Gold and Diamond Spins involve collecting gold nuggets with prizes attached. Boosting you winning chances are multipliers in the Diamond Spins.

The barrel of TNT is the mystery symbol. All examples of these that appear on the same spin transform into the same matching symbol (which can be anything apart from the scatter). Known as the Mystery Symbols feature, a payout calculation is then made with the matching symbols in position.

The Gold Spins feature is triggered in a slightly unusual manner. It’s activated by landing dynamite wilds on reels 1 and 2 on the same spin alongside a golden nugget scatter symbol on reel 3.

You’ll then head to a new screen where you’ll be awarded 3 respins with the triggering nuggets held. The reels here are made up of blanks, gold nuggets and diamonds. Each nugget comes with a cash value attached.

If you land a new nugget, it too locks in place and the respins tally reset to 3. When you’ve played out all your respins, the values are added together to give you a final prize. 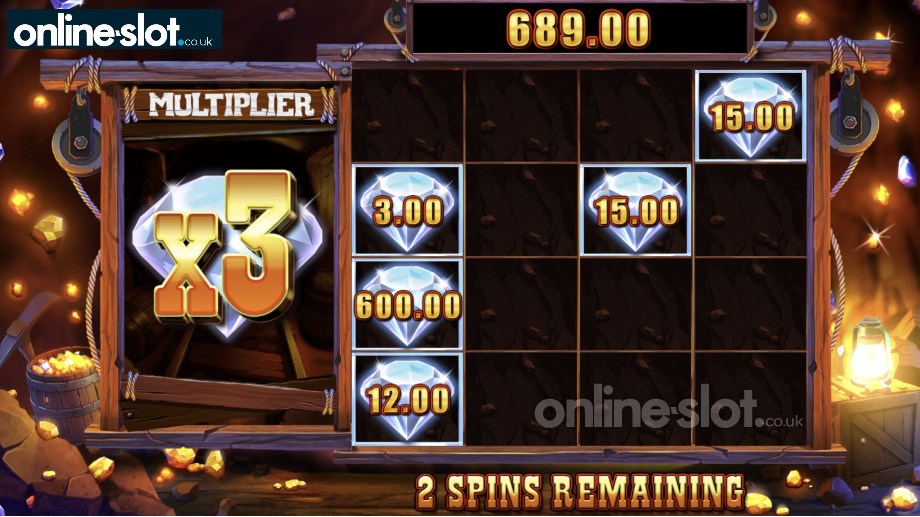 So far, so standard. Things have the potential to get much more interesting if you manage to collect 3 diamonds during the Gold Spins feature and activate the Diamond Spins feature

These play out once you’ve completed the Gold Spins. You’ll then receive 3 spins. On each of them, the reels on the left side of the screen will spin to reveal a multiplier of 2x, 3x, 4x, 5x or 10x. The values of the nuggets are boosted by that multiplier and will appear on the diamonds that feature here. The values from the diamonds are added together and a payout calculation is made.

The process is then repeated for your second and third spins. Land a big 5x or 10x multiplier here and you can land some enormous payouts. Even with 3x, 3x and 2x multipliers from our 3 Diamonds Spins, I managed to scoop over 3,000 x my total stake.

Rolling in Gold Review Summary – this Gold Rush is a belter

I really enjoyed the Rolling in Gold slot game. The mining theme is superbly realised with some top sound and visuals. The range of extras here isn’t massive but the Gold Spins and especially the Diamond Spins features can deliver some explosive action.

Get lucky with those multipliers in the Diamond Spins and Rolling in Gold could live up to its name. With maximum wins of 50,000 x your total stake up for grabs, make sure you start digging for gold. If you want more mining themed games, the TNT Tumble slot by Relax Gaming is recommended as it offers wins of up to 12,278 x stake.

What is the Rolling in Gold RTP?

The Rolling in Gold return to player rate is 96.03%. That’s about average for a online slot release. The variance is in the medium to high category.

What is the Rolling in Gold max win?

The most you can win in Rolling in Gold is 50,000 x your total stake. This can be won with the multipliers in the Diamond Spins feature.

What is the Gold Spins feature?

The Gold Spins feature gives you streak respins. Land gold nugget symbols and their values are collected in a meter with the respins resetting to 3. When the respins are over, you’ll win the combined value of all the gold nuggets.

How does the Diamond Spins feature work?

The Diamond Spins feature is played when you land 3 diamond in the Gold Spins. You then get 3 spins with prizes boosted by a multiplier up to 10x. A payout is made after each spin, not when the spins are completed.