Blueprint Gaming’s King of Jungle Bling is back for more mischief in the Return of Kong Megaways slot. It’s a 6 reel, cascading wins game where the number of Megaways can get as high as 117,649. Feature highlights here include a Monkey Modifier where Kong lobs up to 100 barrels onto the reels. These then transform into the same matching symbol and a payout consideration is made. The main bonus is the Free Spins feature. Each cascading reel win during the round increases the multiplier. You can land the Monkey Modifier here too. With 50,000 x stake wins per spin, learn more about this rather madcap slot in our full Return of King Megaways review.

Where to Play Return of Kong Megaways Slot

The setup in the Return to Kong Megaways slot is pretty standard for a Megaways game. There are 6 reels including a 4-symbol window at the top of the screen where symbols spin horizontally rather than vertically. The number of symbols that appear on each of those 6 reels changes with each spin.

That impacts on the number of ways you can create a winning combination. The more symbols on display, the more chances to form a winner. If the reels reach their maximum configuration, you’ll have 117,649 Megaways active. Winners are created by landing 3 or more matching symbols or wilds on adjoining reels, starting from reel 1.

You can join Kong at stake levels of between 10p and £10 per spin. Click on the Bet button to the left of the reels and choose from the 10 stake levels.

The Return of Kong Megaways RTP is 96.03% which is about average. The volatility here is in the medium to high range with the bigger wins coming from the bonus features. The max win is 50,000 x your total stake per spin. 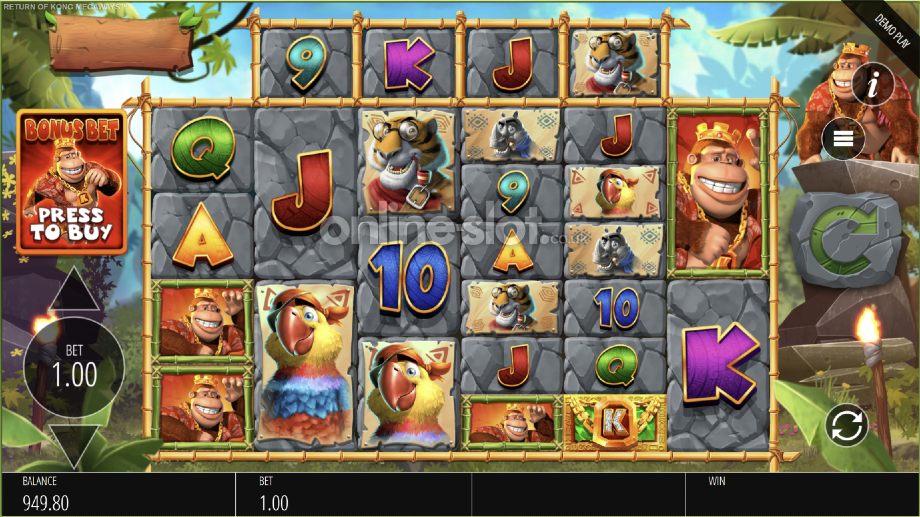 As usual for a slot Blueprint Gaming slot, there’s a glossy, high-spec look to the design in the Return of Kong Megaways slot. Based loosely on King Kong, this cartoon style game is fun and colourful. By the way, it’s the same character found in the King Kong Cash slot (also by Blueprint).

Accompanying the imagery is a rhythmical, drum-heavy backing track which fits the jungle setting perfectly. Set against a lush jungle backdrop, flanked by flaming torches and watched over by his majesty, Kong, the reels are made up of stone blocks which thud into position with each spin.

On those stone blocks you’ll find lower value A to 9 royals alongside cartoon birds, rhinos and tigers. Kong is the best paying standard symbol, awarding 1, 2, 10, 25 or 50 times your stake if you land 2, 3, 4, 5 or 6 in combination. There’s also a wild symbol which substitutes for all of the standard symbols.

You’ll find the key elements of a Megaways slot in Return of Kong Megaways. With 6 bonus features, the gameplay highlights here include cascading reels, mystery transforming symbols and free spins with an expanding multiplier. We’ll start by looking at the game engine.

Each time you land a winning combination, the Cascading Reels feature comes into pay. The successful symbols are blasted off the reels and new symbols drop in and replace them. A new payout consideration is then made with the new symbols in place. Create a new winner and another cascade follows. These continue until there’s one where no new winner is formed.

On any spin, Kong can stir into life and fling up to 100 barrels onto the reels. Triggering the Mystery Kong feature, these barrels will all transform into the same matching symbol on that spin. This triggers randomly in the base game but is active on each free spin. 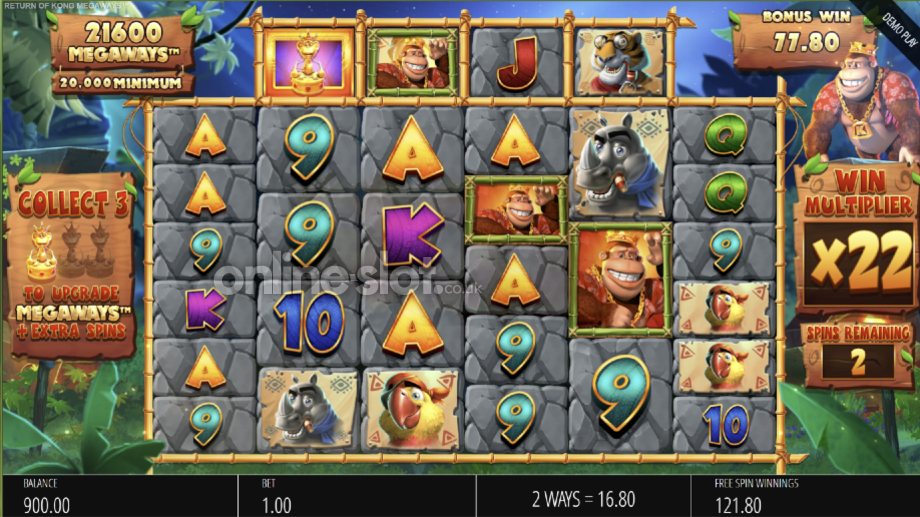 Each cascade win that hits during the free spins increases a multiplier by 1. Known as the Unlimited Win Multiplier feature, these multipliers don’t reset following an unsuccessful cascade either, they keep on rising throughout the feature. As mentioned above, the Mystery Kong feature applies on every free spin. 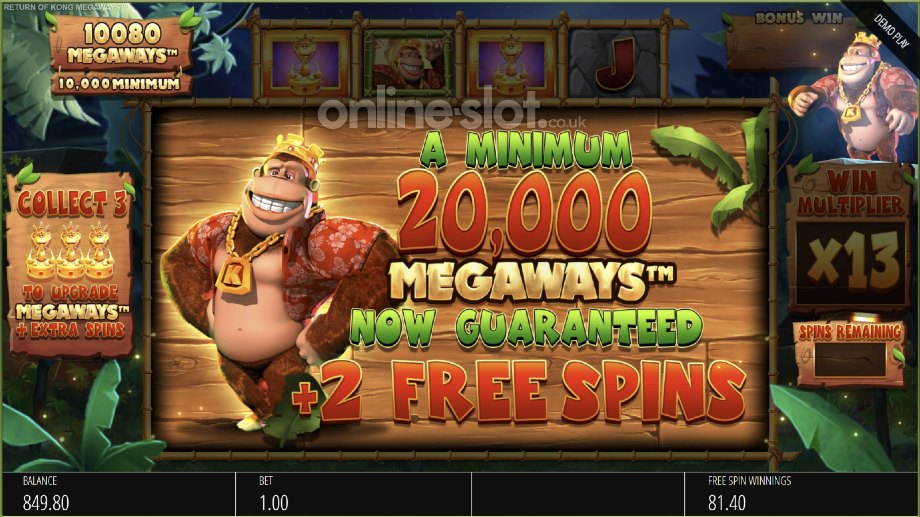 Keep a special eye out for the Golden Monkeys. Each time you collect 3 of these, the Monkey Trophy Collection feature is triggered. 2 more free spins are added to your total. The minimum number of Megaways active also increases each time you amass 3 Golden Monkeys.

Lastly, there’s a Bonus Bet feature. Not available in all jurisdictions (like the UK), there are 3 options to choose from basically:

Like the other slots to star the boss of Skull Island like King Kong Cash, there’s a slightly anarchic feel to the Return of Kong Megaways slot. The imagery, graphics and symbols are the same as the original game. That’s certainly the case with the design where Kong can roar into life on any spin and trigger a random feature.

The gameplay here is actually pretty standard for a Megaways slot. It’s the standard offering of cascading reels, mystery symbols, free spins and expanding modifiers. The key to big wins is in the free spins as the multiplier can increase indefinitely.

However, the Monkey Trophy Collection feature is a nice addition as it give you more ways to win as well as extra free spins. I found by biggest wins came when this was triggered a few times and I was playing with a minimum of 20,000 Megaways on every free spin.

If you like the usual Megaways formula, you can expect the usual stuff here, albeit with a more madcap design than you might normally get.

What is the Return of Kong Megaways RTP?

The Return of Kong Megaways RTP is 96.03% which is average. The variance is medium to high with the bigger wins coming from the bonus features.

What is the Return of Kong Megaways max win?

The maximum win per spin is 50,000 x your total stake. Whilst this can be won on every spin, your chances increase during the free spins due to the unlimited win multiplier.

Are there any Return of Kong Megaways free spins?

Yes, the Free Spins feature will begin with at least 12 free spins. Each time you land a cascade win, the multiplier increases by 1 with no limits. With mystery symbols on each free spin, collect Golden Monkeys for extra free spins.

Is there a Return of Kong Megaways mobile slot?

Yes, this slot has been fully optimised for play on a variety of different types of devices. You can play Return of Kong Megaways slot for free here on any device.