The mythical tales of ancient Greece have proved to be fertile ground for slot developers. Blueprint Gaming has turned once again taken inspiration from these legendary stories to create the highly innovative Realm of Legends slot.  Played on a 7x7, cluster pays grid, it comes with cascading reels which trigger each time you land a winning cluster. Collect symbols to bring modifiers into play which freeze high value symbols, add multiplier wilds, remove lower value symbols or deliver symbol upgrades. There’s also a Legend Falls feature where it’s easier to trigger the modifiers than in the base game. With 50,000 x stake wins, find out what else Medusa, Minotaur, Fire Sprite and Cyclops have to offer in our full Realm of Legends review.

Where to Play Realm of Legends Slot

The action in the Realm of Legends slot plays out on a 7×7 grid. To create a winning combination, you need to land clusters of 5 or more matching symbols or wilds. The bigger the cluster, the better the reward. Get on a winning roll to bring the features into play which we’ll look at below.

Click on the banknote to the right of the reels to adjust your stake size. You can play from between 20p and £100 per spin. You can run up to 100 autospins if required. Win and loss limits are available too.

The Realm of Legends RTP is 96.46% which is above average. The volatility is in the medium to high range. The maximum win is 50,000 x your total stake. 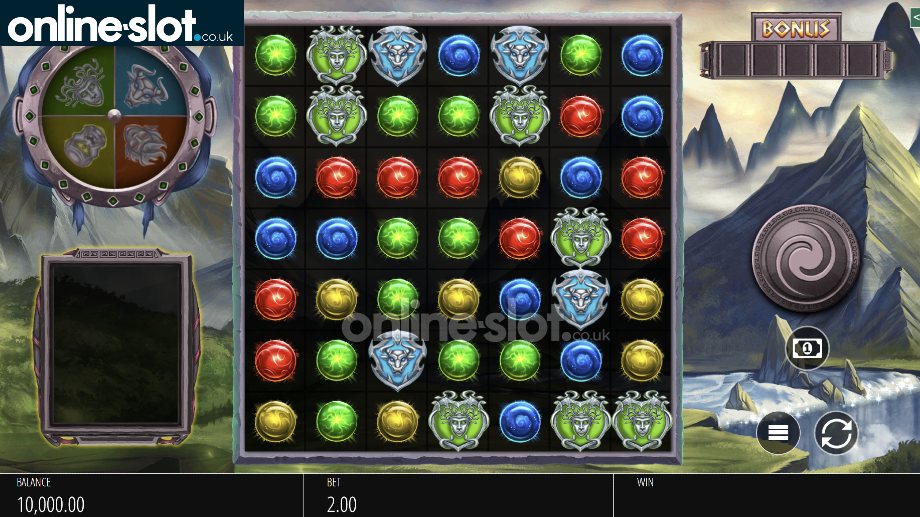 Ancient Greece usually means temples and togas. That’s not the case with the Realm of Legends slot though. With mountains, waterfalls and fields in the background, it has a mythological ancient Greek theme. The design here is quite simple for a Blueprint Gaming game. The bold imagery stands out nicely against the black backdrop. Even with 49 symbols on show, the visuals are clear and crisp.

There’s a soaring, operatic-style soundtrack playing in the background. It won’t be to all tastes but I rather liked it. As usual for a slot from this developer, there’s little to complain about when it comes to sound and visuals.

The reels are made up of 4 lower value orb symbols and 4 higher value emblems, each relating to one of Medusa, Minotaur, Fire Sprite or Cyclops.  The one-eyed giant is the most rewarding emblem, paying 1,000 x your stake if you land a cluster of 25 symbols. That same amount is on offer from the wild that substitutes for all symbols.

Even with so many symbols on show on each spin, the visuals are up to the ask if you’re playing on a smartphone. The exciting gameplay also works nicely on the Realm of Legends mobile slot.

You’ll find a cracking array of extras in Realm of Legends, starting with the quartet of modifiers that are each based on a mythical creature. There’s also a free spins feature where the modifiers hit more regularly.

Realm of Legends uses a cascading reels mechanic. After you’ve landed a winning cluster, the winning symbols are blasted off the reels and new ones drop down to replace them. A new payout consideration follows. If you create a winner here, the process is repeated. The cascades continue until no new winner is formed. 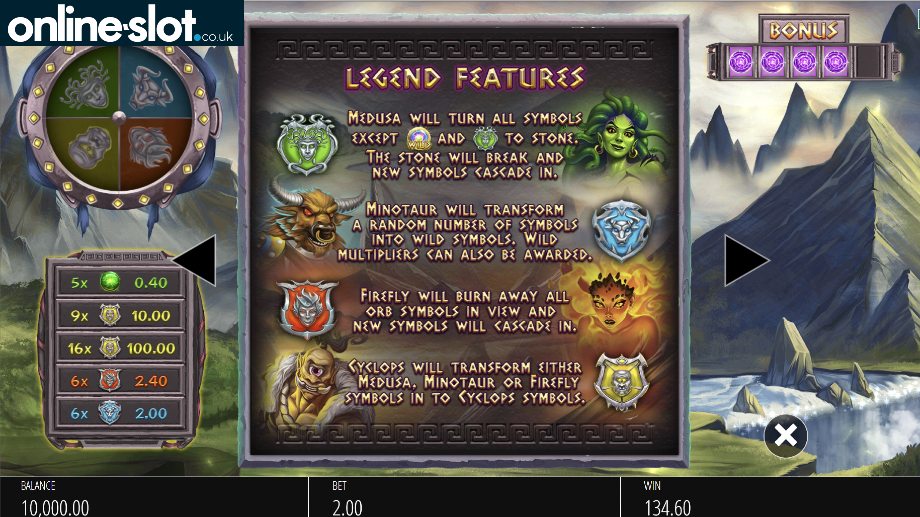 Each time you land a winning cluster, those symbols are added to the symbol bank. If you collect enough symbols in a single set of cascades to pass a milestone number, you’ll get 1 of the Legend features:

It’s possible to get multiple triggers from the same set of cascades. Likewise, the wins that include the modifiers also add symbols to the Symbol Bank.  The modifier ends when no new winner is formed. The symbol banks resets to zero at the start of each spin. 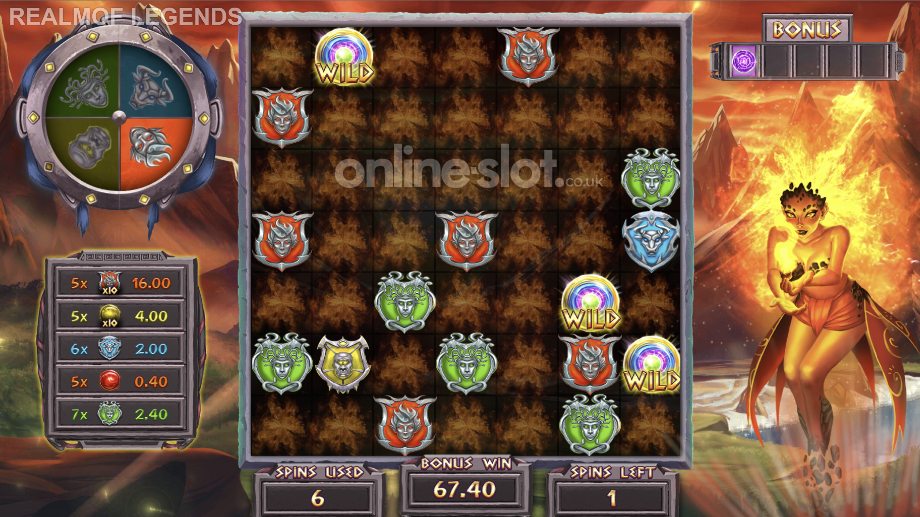 Collecting 5 or more bonus symbols during a single set of cascades triggers the Legend Falls feature. Your reward is 7 free spins. The modifiers are in play during the free spins. You only need to collect half the number of symbols to trigger them though:

In short, you can expect to land the modifiers more regularly than in the base game.

You’d think that the myth and legend theme had been done to death already. Blueprint Gaming has managed to create something nice and fresh in the Realm of Legends slot which combines the developer’s usual design flair with some top gameplay.

The cluster pays, cascading reels and modifiers are an impressive combination. The bigger wins will come during the Legend Falls feature where fewer symbols are required to bring those modifiers to life.  It does remind me a little of the Reactoonz 2 slot from Play ‘n GO in terms of the charges.

If you enjoy the ancient myth theme, Realm of Legends is well worth considering. Another option is Age of the Gods by Playtech which features Athena, Hercules, Poseidon and Zeus as well as 4 free spins features and 4 progressive jackpots.

What is the Realm of Legends RTP?

The Realm of Legends return to player rate is 96.46%. Higher than most slot games, the variance is in the medium to high category with the bigger wins coming from the bonus features.

What is the Realm of Legends max win?

The biggest possible win in Realm of Legends is 50,000 x your total stake. The key to winning big is to combine to Legend features in the free spins.

What are Cluster Pays?

In a Cluster Pays slot like Realm of Legends, winners are created by landing clusters of 5 or more matching symbols or wilds. A cascade follows with new symbols dropping in and replacing them.

Is there a Realm of Legends free spins feature?

Collect 5 bonus symbols during a set of cascades and you’ll trigger the Legend Falls feature with 7 free spins. Collect half the number of symbols in the symbol bank to activate the 4 Legend features which offer high value drops, extra wilds with multipliers and symbol upgrades.