The King Kong Cash slot is powered by Blueprint Gaming and comes with 5 reels and 20 paylines. Be the king of the swingers with a total of 9 bonus features. There are 4 random base game features that award random wilds, matching symbols, respins with clusters and scatters. Then you have 5 main bonus features which give you cash prizes, a cash trail, 2 free spins features and the Big Monkey Bonus feature where you can win up to 1,000 x stake. Find out why this game is a cult favourite in our King Kong Cash review.

The King Kong Cash slot comes with 5 reels, 3 rows and 20 fixed paylines. A winning combination is created by landing 3 or more matching symbols across a payline. These need to appear on adjacent reels and from left to right. The only exceptions are the King Kong Cash and wild symbols as you only need 2 to get a win.

You can play King Kong Cash from 20p to £200 per spin. Click on the arrows to the left of the reels to select your stake. Alternatively, click on the amount, which will display all available stakes on a popup screen.

The King Kong Cash RTP is 95.79% which is just below the 96% online slots average. The variance is in the middle with a nice range of balanced payouts throughout the random features and main bonus features. 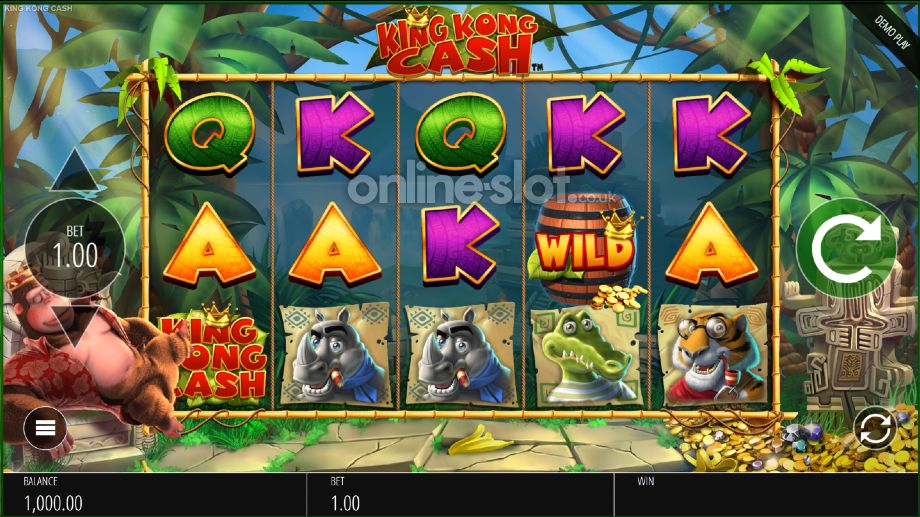 The King Kong Cash slot has a light-hearted gorilla theme and is far from the inspiration of the game which is the King Kong film monster. With cartoon-style graphics, Blueprint Gaming has created a cracking looking title here.

Colourful and fun, it has a swinging soundtrack to match the madcap feel. You head into a dense jungle where you’ll encounter low-value A, K, Q and J royals as well as cartoon crocodiles, parrots, tigers and rhinos.

The highest paying symbol is the King Kong Cash logo. Land 5 of these on a payline and you’ll pocket a 25 x stake payout.

The barrel is the game’s wild and substitutes all symbols bar the Bonus scatter. Like the King Kong Cash logo symbol, 5 on a payline will pay 25 x your stake, which is quite generous.

Produced using HTML5 technology, King Kong Cash can be played on mobile, tablet and desktop devices. The simple 5×3 reel layout works just as well on smartphones as it does on laptops and PCs.

When it comes to bonus features, there are 9 to benefit from in King Kong Cash. You have 4 randomly triggered base game features as well as 5 main bonus features. Strap in: you’re in for a wild ride. 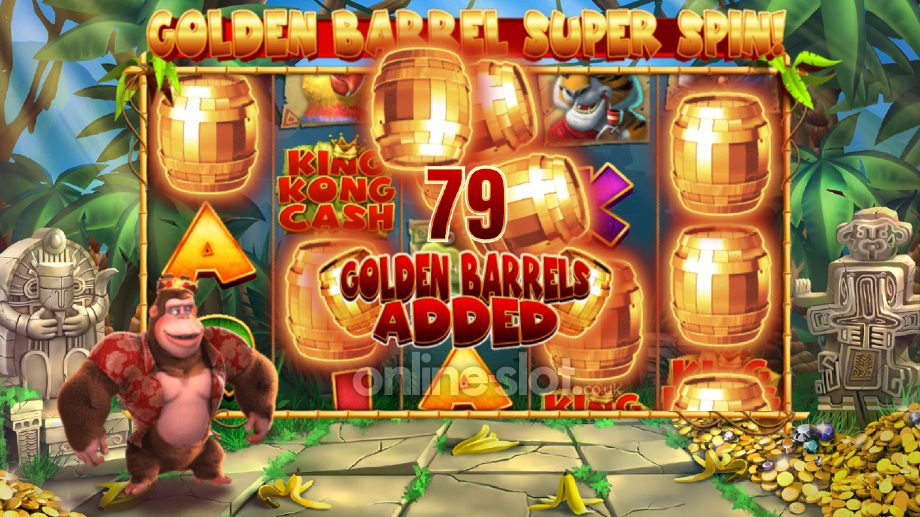 To the side of the reels is a snoozing King Kong. He can wake from his slumber at random on any base game spin and in the process, deliver 1 a Sleepy Kong Bonus feature. With 4 to play, here’s what they entail: 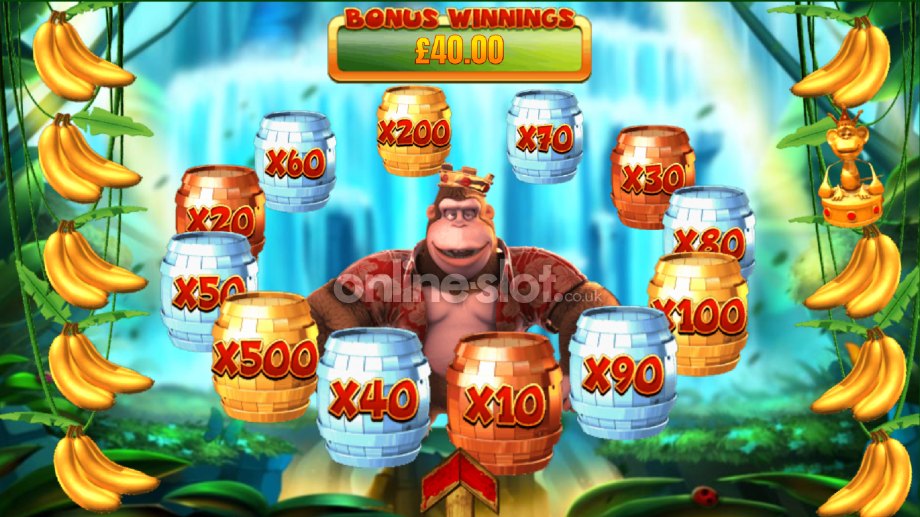 These bonus features are triggered by landing 3 of the Bonus symbol of King Kong himself anywhere on the reels on the same spin. Spin the wheel to decide which bonus feature you’ll play:

The bonus features listed above offer increasing average payouts. If you don’t like the feature you’ve been awarded, you can gamble and try to win a better bonus feature. If you lose, you’ll still get a Mystery Cash consolation prize.

The King Kong Cash slot has become something of an institution. Found in arcades around the UK, there’s plenty of entertainment in the form of the 9 bonus features. The base game features are triggered regularly which is good but they offer much smaller wins than the main extras.

The key to potentially big wins is from the Big Monkey Bonus feature. However, I found the best to be the Golden Kong Free Spins feature as playing with 40 paylines can give you 1,000 x stake wins on every free spin. However, the main bonus features will be harder to activate.

Design-wise, King Kong Cash is excellent. The images are superbly drawn and the rhythmical, drum-heavy soundtrack gives the game a nice tempo. Combine that with the range of extras and this favourite becomes a very playable game.

You should try the Return of Kong Megaways slot which is just as fun and offers 50,000 x stake max wins.

What is the King Kong Cash RTP?

The King Kong Cash RTP is 95.79% which is just below the 96% average. Medium variance, it compensates with 9 bonus features

What is the King Kong Cash max win?

The most you can win by playing King Kong Cash is 1,000 x your total stake. This can be won in 1 of the free spins features as you play with 40 paylines and from the Big Monkey Bonus feature.

Are there any King Kong Cash free spins?

Yes, there are 2 free spins features. The best is the Golden Kong Free Spins feature as you play with 40 paylines so you can win double. You also collect wilds where are used in Super Spins at the end.

Is there a King Kong Cash demo?

Yes. The King Kong Cash free play version is available here at Online-Slot.co.uk. The online demo is available to play on mobile, tablet and desktop devices.