There are some sweet treats on offer in the Donuts slot. Played on a 4x4 grid, this Big Time Gaming title offers up to 2,401 ways to win. With an America feel, it comes with donut boxes which reveal up to 4 extra symbols as well as wild multipliers up to 4x. There’s also a Free Spins feature where multipliers can reach 50x. With an RTP of 96.54%, it offers maximum wins of 40,000 x stake per spin. Find out more in our Donuts review.

Where to Play Donuts Slot

The Donuts slot is played on a 4×4 grid. Winning formations are created by landing 3 or 4 matching symbols from left to right in any position.

According to developer Big Time Gaming, it’s the world’s lowest wagering ‘ways’ slot as you can play from 5p per spin, up to £10 a spin. If you like, you can use the Auto Play function where up to 100 auto spins can be selected. There are also loss and single win limits if you like.

The Donuts RTP is high at 96.54% (the average is about 96%). However it’s a high variance slot meaning most of the bigger wins coming in the free spins. That said, the max win is 40,000 x your total stake per spin or free spin.

Theme – Audio and Design Features – head out on a desert highway 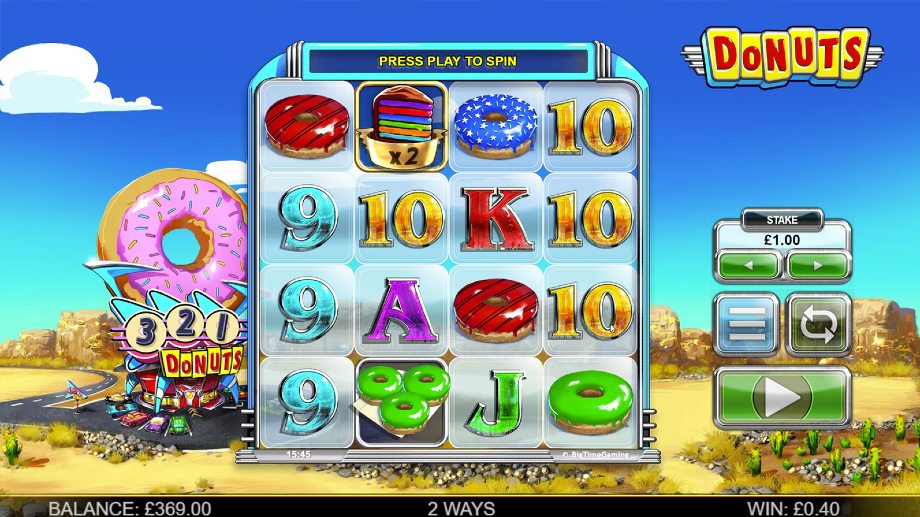 The design in the Donuts slot has a feel of Americana. The reels are set against a desert highway with a ‘321 Donuts diner’ in the background. For some reason, it does a hint of The Simpsons about it (maybe I’m thinking about Homer and donuts).

The game uses crisp and high definition graphics and a toe-tapping soundtrack. The font used to highlight wins and the symbols have been used in other Big Time Gaming titles like Bonanza Megaways making you feel right at home.

With the 4×4 grid set within a jukebox, on the reels you’ll see lower value A to 9 values alongside 4 brightly coloured donuts. The best of these is the purple and yellow donut which pays 15 x your stake if you land 4 on a payline.

There’s also a Jukebox wild that can land on reels 2 and 4 only which substitutes for all other symbols apart from the scatter.

As with all Big Time Gaming slots, Donuts can be played on desktop, mobile and tablet devices. The 4×4 grid lends itself well to smartphone devices. The colourful and clear graphics work well on smaller screens making it perfect for mobile play.

The Donuts slot comes with 2 bonus features. You have donut boxes which reveal up to 4 donut symbols or multiplier wilds up to 4x. It’s all about the Bonus feature where you reels spin in the Bonus Countdown to give you multipliers up to 50x. This multiplier is then used for the free spins which you can win an infinite amount of.

On any spin you could see a donut box land. When it does, the Donut Boxes feature is triggered. The donut boxes open up to reveal up to 4 of the same donut symbol. This is where the potential 2,401 ways to win comes in.

Alternatively, they can reveal multiplier wilds that can boost payouts by 2x or 4x if they form part of a winning combination.

Land 3 or 4 of the golden donut scatter to trigger the Bonus feature. You’ll then be awarded 12 or 20 free spins. Before these start, you’ll play the Bonus Countdown which is played on a new set of reels that only contain blanks and golden donuts. You’ll start with your triggering scatters which come with multipliers attached. 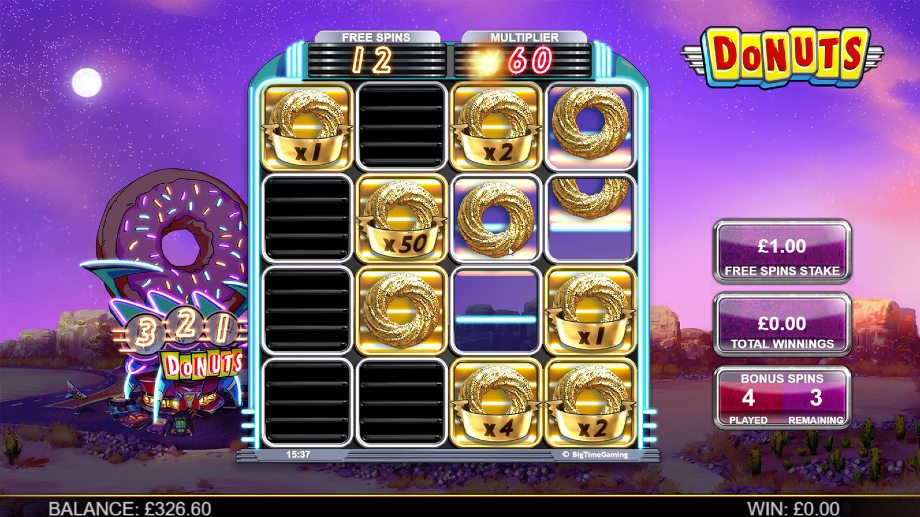 The reels then spin 3 times. If a golden donut lands, it holds in place and the respins reset to 3. The countdown continues if you don’t land a golden donut. Each golden donut will have a multiplier up to 50x.

Once your spins have played out, all of the multipliers are added together and carried forward to the free spins proper. You could end up with a huge multiplier. The free spins then begin. 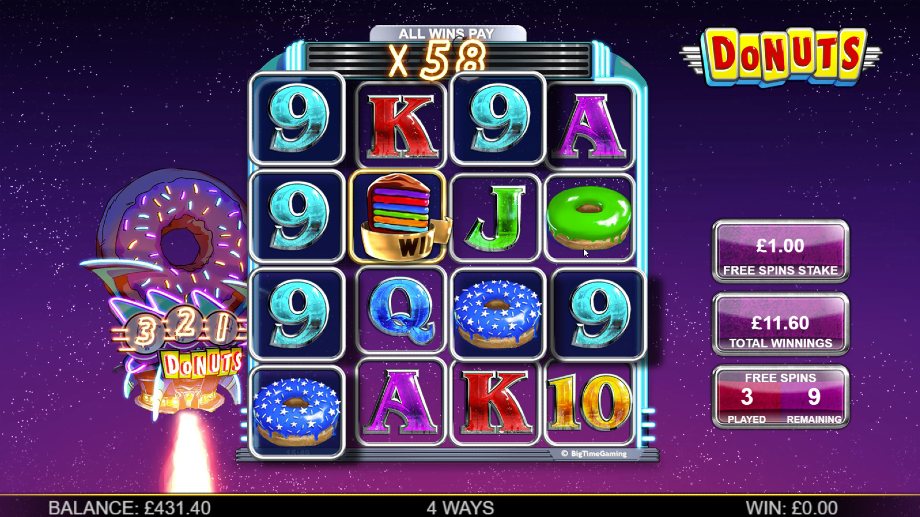 Land 2, 3 or 4 scatters during the feature and you’ll get another 10, 20 or 30 free spins added to your total. You can benefit from unlimited retriggers too meaning unlimited free spins.

Donuts Summary – all about the free spins

The Donuts slot is all about the Bonus feature thanks to the potentially big multipliers on offer. This game is 10/10 variance wise so expect a few hundred spins to trigger the Bonus feature, if at all.

I found it to be a bit of a hit and miss affair but did manage to cash in after the golden donuts worked their magic in the Bonus Countdown. The key to winning big is get a high multiplier from the Bonus Countdown which will set the tone for the subsequent free spins.

With potential wins of 40,000 x your total stake per spin or free spin and a high 96.54% RTP, Donuts is perfect for players who love high variance slots. If you have a sweet tooth, Big Time Gaming is due to release the Chocolates slot game which is Donuts’ sequel and offers wins of up to 65,536 x your total stake.

What is the Donuts RTP?

The Donuts RTP is 96.54% which is better than most online slots (normally around the 96% mark). It is 1 of Big Time Gaming’s most volatile games though so tread carefully.

What is the Donuts maximum win?

The most you can win in the Donuts slot is 40,000 x your total stake. This can be achieved in the base game and free spins with the wild multipliers from the donut boxes key.

Are there any Donuts free spins?

Yes. The Bonus feature begins with up to 20 free spins. Then the Bonus Countdown takes place where you get 3 spins to collect golden donuts. These increase the multiplier by up to 50 each time. This is then used during the free spins where you can unlimited extra free spins.

How does the Donut Boxes feature work?

When a donut box lands, the Donut Boxes feature activates. The donut box will then reveal up to 4 of the same donut symbol or multiplier wilds up to 4x. This also applies during the free spins.