Head out on the high seas with the 123 Boom slot from 4ThePlayer. With a pirate theme, it has a land based feel which is appealing. With 5 reels and 1,024 ways to win, it’s playable from 10p a spin on all devices. It offers a unique Slot Slider feature where you choose how the symbols spin in. With each win, the Explosive Wins feature applies which can give you up to 107 chain reactions for successive wins. In the Bonus feature, every explosive win increases the multiplier. Scatters fire cannonball wilds onto the reels which can lead to explosive wins. The RTP is 96.4% and it offers max payouts out 14,727 x stake per spin.

Where to Play 123 Boom Slot

The 123 Boom slot is played using 5 reels, 4 rows and 1,024 ways to win. Winning combinations are formed by landing 3, 4 or 5 identical symbols on adjacent reels beginning from the leftmost reel (i.e. reel 1).

The stake per spin cater to all players as you can spin away from 10p to £20 per spin. Just click on Plus or Minus buttons either side of the main spin button. There’s an Autoplay function where you can choose 10, 25, 50, 75 or 100 autospins. You will also need to add loss and single win limits.

4ThePlayer is known for high RTP rates and this release doesn’t disappoint. The 123 Boom RTP is 96.4% which is higher than the 96% average. 66.9% of wins will come in the base game with 29.5% coming from the features.

Not as volatile as other releases from 4ThePlayer, the variance is in the medium to high range. The hit frequency rate is 28.57% meaning over a quarter of your spins will result in a winning outcome. When you win you can win big though. Walking the plank can lead to 14,827 x your total stake on each spin. The bigger wins will come in the free spins where there’s an increasing multiplier. 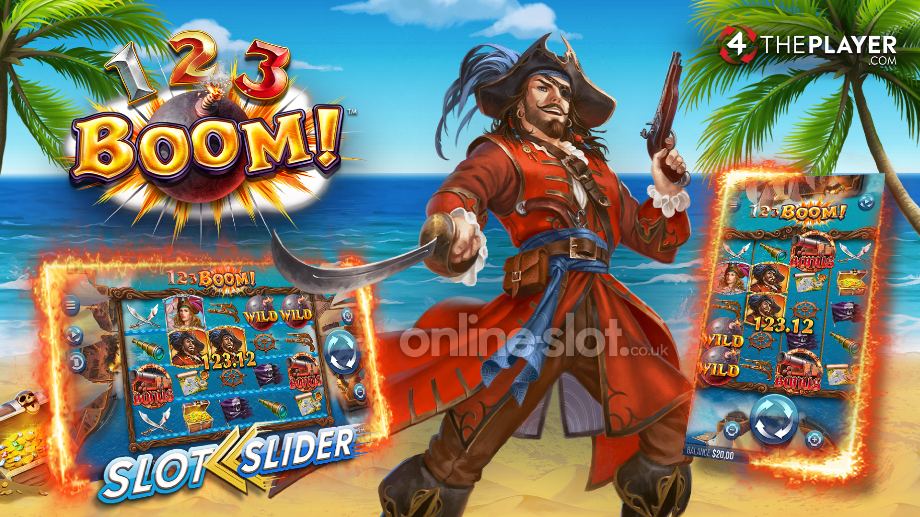 The 123 Boom slot has a pirate theme. The look and feel is that of a land based video slot and has a nostalgic feel to it. Set in the high seas, you will see 2 pirate ships battling it out at either side of the reel set.

The sounds are realistic as you’ll hear the creaking of the pirate ship deck. As soon as you hit the spin button, there’s a triumphant and uplifting soundtrack which gives you a feeling of adventure.

The pirate captain looks a little like Blackbeard who is probably the most famous pirate ever. Blackbeard is the most rewarding symbol giving you 3, 5 or 20 x your total stake for 3, 4 or 5 in combination. There’s also a Cannonball wild which we will look at more closely below.

The 123 Boom slot has 3 bonus features. You can choose how you spin the reels. Every win activates the Explosive Wins feature where winning symbols explode to make room for new ones. Each slide can give you more wins with up to 107 explosions on each spin. In the free spins, each explosive win sees the multiplier increase, up to 60x. The scatters also fire cannonball wilds onto the reels for more continuous wins.

With 4ThePlayer being a mobile-first slots developer, the 123 Boom game can be played on desktop, mobile and tablet devices. However, this slot offers 2 spin modes which can be used on both desktop and mobile devices. Known as Slot Slider, you have Slide Spin or Top Spin:

Symbols slide into the direction you choose (Slide Spin or Top Spin modes). If a winning combination lands, the Explosive Wins feature is activated. The winning symbols explode with the non-winning symbols sliding to occupy the spaces.

New symbols then slide in to fill the newly-vacated spaces. This allows for continuous wins (referred to as cascades). With the way 4ThePlayer has done this, you can benefit from up to 107 explosive wins which can lead to some serious payouts.

To help matters further, Cannonball wilds can slide in on non-winning spins to form explosive wins. These wild symbols substitute for every symbol apart from the Cannon Bonus scatter symbol.

The most important symbol is the Cannon Bonus scatter. 3 or more of these will trigger the Bonus feature. Beginning with a 2x multiplier, the multiplier increases for every explosive win.

There are no set number of free spins. The Cannon Bonus scatters are collected and used to fire Cannonball wilds onto the reels. Like in the base game, this can lead up to 107 explosive wins on every free spin.

The multiplier will continue to rise with each explosive win. The multiplier has no limits if you’re lucky. Finally, when you run out of scatters, the feature will end.

The 123 Boom slot may look like a land-based game but the gameplay is unique and innovative. As 4ThePlayer have proved with previous releases like 6 Wild Sharks, they have introduced a unique way of cascading wins which can lead to 107 consecutive winning combinations on each spin.

The bigger wins will come in the Bonus feature as the multiplier can increase with each explosion. You can also benefit from lots of free spins, just as long as Cannon Bonus scatters appear on the reels.

Yet again, 4ThePlayer has delivered a fresh take on the popular pirate theme. The variance is lower than previous releases and the RTP is still high at 96.4%. Importantly, it offers big payouts of up to 14,827 x stake per spin which is very high.

Despite being lower variance than other 4ThePlayer slots, 123 Boom offers payouts of up to 14,827 x your total stake per spin. Your chances increase in the free spins with each explosive win increasing the multiplier.

Are there any 123 Boom free spins?

Yes, the Bonus feature is triggered with 3+ Cannon Bonus scatters. Beginning with a 2x multiplier, every explosive win increases the multiplier with no limits. Scatters are collected and will fire Cannonball wilds onto the reels. The free spins end when no more scatters appear on the reels.

How does the Explosive Wins feature work?

When you get a win, the Explosive Wins feature is triggered. Winning symbols explode and the other symbols slide to fill the empty spaces. With new symbols then appearing, you can get continuous wins. You can get up to 107 explosive wins on each spin. Also, Cannonball wilds slide in on non-winning spins to help give you wins.