A mighty ancient warrior takes on the mythical minotaur in the Theseus Rises slot. This latest trip to ancient Greece has been created by 1x2 Gaming and has 5 reels and 1,024 ways to win. It comes with superb design and a pair of cracking features. The Labyrinth Chase is a trail bonus where catching the minotaur delivers an extra jackpot prize. There’s also a Free Spins feature that awards up to 25 free spins. Look out for special golden thread symbols that increase a multiplier by 1x every time they appear. Find out more in on detailed Theseus Rises review.

Where to Play Theseus Rises Slot

The Theseus Rises slot is played on a 5 reel, 4 row machine which combines to offer 1,024 ways to win. To create a winning combination, land 3 or more matching symbols on adjacent reels, starting from reel 1.

You can play this ancient Greek quest at bet levels that range from between 20p and £50 per spin. Click on the coin symbol to adjust. Press the A button above the spin tab to set up to 99 autoplay spins. There are plenty of options when it comes win and loss limits too including a feature stop.

Medium to high variance, the Theseus Rises RTP is 96% which is about average. The max win is a 7,500 x your total stake which comes in the Labyrinth Chase Bonus feature.

1×2 Gaming has included a trio of classic features in Theseus Rises. There are free spins with dynamic multipliers and, appropriately enough given the source material, a trail bonus with huge potential payouts.

The cascading reels mean that successful symbols are removed from the grid following a winning spin. New symbols drop into the vacated positions and a new payout consideration is made. The cascades continue until there’s one where no new winner is formed.

This Labyrinth Chase Bonus feature is triggered by landing the bonus symbol on reels 2, 3 and 4 on the same spin. You’ll then head to a trail where Theseus and the Minotaur will do battle. Our hero and the beast will take it in turns to roll a die and work their way around the board.

When Theseus lands on a square, he wins the prize attached. The square also levels up. All squares start at the lowest blue level but can be upgraded to green or red with prizes rising accordingly. You can also bring multipliers into play here.

The round ends when the Minotaur catches Theseus or Theseus catches the Minotaur. If the latter happens, a bonus jackpot of 5 x your stake is awarded. If any multipliers are active when Theseus captures the Minotaur, the jackpot bonus also gets the multiplier boost.

Prizes of up to 7,500 x your total stake are up for grabs in the Labyrinth Chase Bonus feature.

The other feature in Theseus Rises is a classic Free Spins feature. It’s triggered in the standard manner by landing 3, 4 or 5 scatter symbols on the same spin. Your reward here is 10, 15 or 20 free spins.

Boosting your chances is the golden thread symbol. Each time one of these lands a multiplier increases by 1x. This remains in play or increases for any free spins you have left. Retriggers are possible too. Landing 3, 4 or 5 scatters adds another round of 3, 4 or 5 free spins to your total (sadly not 10, 15 or 20).

You have the opportunity to buy either feature if you don’t want to wait for a natural trigger. The Labyrinth Chase Bonus feature will set you back 50 x your total stake with the Free Spins slightly more expensive at 80 x stake. This option is available in the UK though due to Gambling Commission regulations. 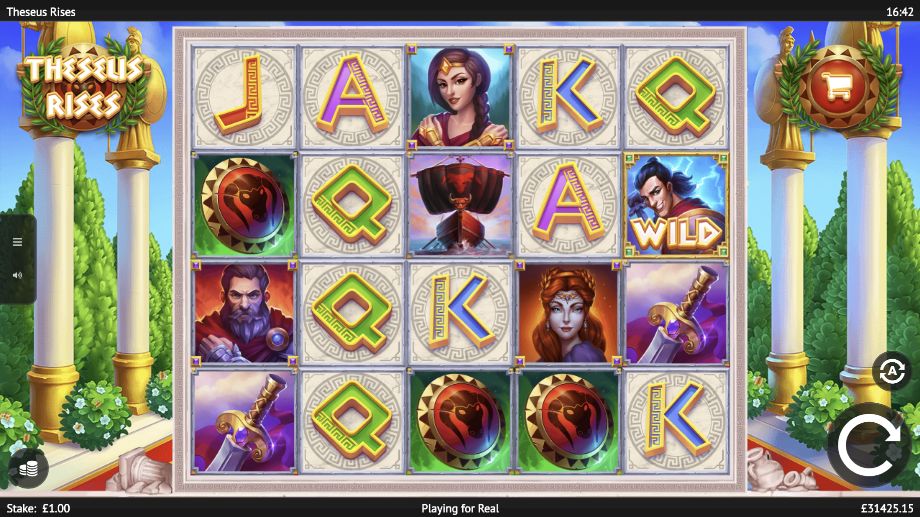 There’s a very fresh, modern look to the graphics in the Theseus Rises slot. Set in the heart of Crete, it has a Greek mythology theme. The bright, colourful symbols are packed full of details. Even the lower value royals look rather lovely. With a traditional soundtrack pumping away in the background, it comes together very nicely.

Flanked by marble columns, golden statues, and green trees, the reels are made up of A to J royals, a sailing ship, a shield, a sword and an assortment of ancient characters. The king is the best paying standard symbol, paying 20 x your total stake if you land 5 in combination.

The sword-wielding Theseus is the wild. He replaces all the normal symbols when he forms part of a winning combination.

The high-class imagery and playable features found in the desktop version are there in the Theseus Rises mobile slot. It looks and sounds terrific, even on a small screen. No grumbles here.

With hundreds of slots taking Greek myths as inspiration, it can be tricky for a slot with that theme to stand out. 1×2 Gaming has managed that with Theseus Rises thanks to the very impressive design.

The features aren’t massively innovative but the cash trail bonus and the free spins with expanding multipliers are a solid combination. The Labyrinth Chase Bonus feature can give you 7,500 x stake wins which is impressive for a trail bonus feature.

You won’t find anything revolutionary here but if you like quality sound and visuals and the classical age theme, the Theseus Rises slot is one to consider. If you fancy a trip to ancient Greece, there’s no better game than the Age of the Gods slot by Playtech – it offers 4 free spins features and 4 progressive jackpots.

What is the Theseus Rises slot RTP?

The Theseus Rises return to player rate is 96%. That’s about par for a slot release these days. We’ve seen bigger number than that but also worse. It’s in the middle of the pack as far as RTP rates go.

What is the Labyrinth Chase Bonus feature?

This is a cash trail bonus where Theseus tries to capture the Minotaur. Roll the dice to move along the trail, collecting prizes, multipliers or upgrading squares as you go. Prizes of up to 7,500 x stake can be won. Check out the Labyrinth Chase Bonus feature section for more details.

Is there a Theseus Rises free spins feature?

Yes, land 3, 4 or 5 bonus symbols and your reward is 10, 15 or 20 free spins. Look out for the golden thread symbols during the Free Spins feature as it increases a multiplier by 1x whenever it appears. You can also win more free spins.

Can you play Theseus Rises on your mobile?

Yes, 1×2 Gaming has created versions of Theseus Rises that are fully optimised for play on desktop, tablet or mobile devices. The standard graphics work very well, even on handheld devices.