Blast off into space in the Stellar Ways slot, another release in 1x2 Gaming’s Reel Classics series. This one is a little different from the other slots in the franchise in that it’s played on a 5 reel, 486 ways to win, pays both ways machine. Like many similarly themed games, the main attraction is the wild symbol which can land on the middle 3 reels. You’ll also receive a respin with the wild locking in position. It’s possible to turn reels 2, 3 and 4 wild and then play out a respin. With 1,500 x stake wins available, find out more about this futuristic-looking slot in our full Stellar Ways review.

Where to Play Stellar Ways Slot

The action in the Stellar Ways slot plays out on a 5 reel, 3 row machine. In most cases, that combination means 243 ways to win. Things are a little different here though. The win both ways game engine effectively doubles the ways you can create a winning combination and takes the ways to win from 243 up to 486.

Click on the coins in the bottom left-hand corner of the screen to adjust your bet size. Stakes here range from 10p to £50 per spin. You can also display your balance in coins if you prefer. The interface used by 1×2 Gaming is simple enough so playing with or without sound effects and background music is easy to determine.

The Stellar Ways RTP is 96.1% which is about average. The variance is just above medium and classed as 3/5 by developer 1×2 Gaming. The maximum win from a single spin here is 1,500 x your total stake. 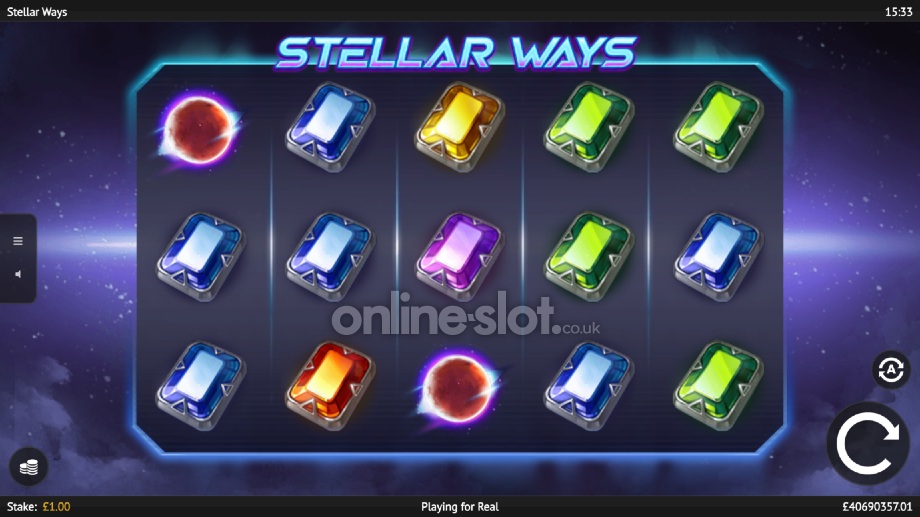 There’s a rather simple, sci-fi theme to the Stellar Ways slot. Set in outer space, there’s an almost mechanical style backing track playing while you spin. It’s how me imagine it would sound if a probe was racing through space. Like the gameplay, the design here is of the no-frills variety. It’s functional without being beautiful.

Set against a deep space backdrop including stars, planets and clouds, the dark blue reels are made up of 5 gemstone symbols and a pair of planets. The most rewarding symbol is the luminous blue planet. Land 3, 4 of these in combination and you’ll receive an award equal to 3, 5 or 7 x your total stake. There’s also a wild that can appear on the middle 3 reels only. As you’ll discover, this wild is central to the game’s main feature.

You can start this voyage into the cosmos on all devices including mobiles, tablets and computers. The simple design and straightforward gameplay work nicely if you’re playing on a small-screen handset. There’s nothing too flashy here but the Stellar Ways mobile slot is decent enough.

Like the other slots in 1×2 Gaming’s Classics series, the gameplay in Stellar Ways is straightforward. This isn’t a slot that’s overloaded with complex extras. There’s only 1 bonus feature here but it has plenty of potential. 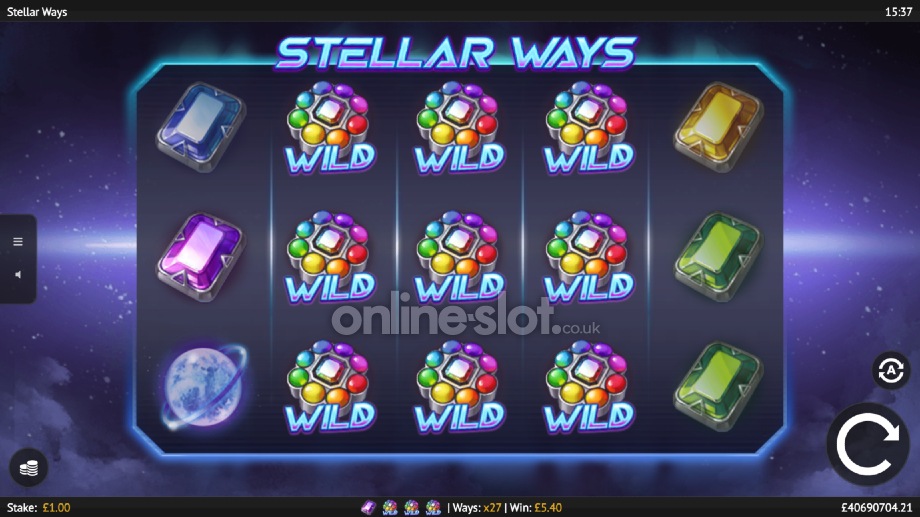 The wild symbol can appear on reels 2, 3 and 4 only. Whenever a wild symbol hits, the Respin feature is triggered. The wild expands to turn the whole of the reel wild. You’ll then receive a free respin with the expanded wild locked in position.

If a new wild symbol lands on the respin, it too expands and another respin follows, this time with 2 wild reels. Hope to see a third wild land. In this happy circumstance, you’ll end up with a respin where the whole of the middle 3 reels are wild. With the win both ways game mechanic, this can lead to some potentially spectacular action. That’s your lot as far as bonus features are concerned.

Like the other games in the 1×2 Classics series, the gameplay and design in the Stellar Ways slot are rather basic. This won’t be a slot if you’re looking for something that offers huge amounts of features and plenty of variety.

The expanding wild respins have proved popular in plenty of other slots including of course, the all-time classic, Starburst. The gameplay here is similar but the win both ways, pays both ways game engine offer something a little different. The max win in Starburst is 500 x stake whereas the maximum payout in Stellar Ways is 3 times that (1,500 x stake per spin).

You won’t find much in the way of innovation here. It’s basically expanding wilds with respins and locked wild reels. 1×2 Gaming actually have the Reel Diamonds slot which offers up to 4 wild reels on each spin and comes with top payouts of up to 3,100 x your total stake. Another option is Crystal Sun by Play ‘n GO which is more or less the same as Starburst but has wild multipliers which can lead to 4,000 x stake wins per spin.

What is the Stellar Ways RTP?

The Stellar Ways return to player rate is 96.1% which puts it in the middle of the pack as far as RTP rates are concerned. The variance is slightly above medium (3/5).

What is the Stellar Ways max win?

The maximum win per spin is 1,500 x your total stake. This can be achieved more easily with the expanding wild symbol that gives you free respins.

How does the Respin feature work?

The Respin feature is triggered when a wild symbol lands. The wild expands to fill the reel. You’ll then get a respin with the wild reel locked in position. More wilds will lead to more respins and up to 3 wild reels.

What does win both ways mean?

In slots that have a win both ways game engine, like Stellar Ways, you can start a winning combination from reel 5 as well as reel 1. In this instance, that effectively doubles the ways to win from 243 up to 486.